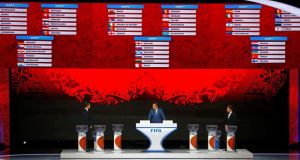 Though dutifully respectful to top seeds Wales, Martin O’Neill admitted in the aftermath of this afternoon’s World Cup draw that he was worried midway through that Ireland might be handed a significantly tougher route to the 2018 finals here in Russia.

“When Serbia came in from Pot 3, you’re fearing the worst,” said the Republic of Ireland boss immediately after learning the identities of the countries that stand between his side and a place at the tournament. “But then Austria, although they’re going very well at this minute, and Wales who’ve propelled themselves from fifth (in fact, it was sixth) seeds the last time around to top seeds.

“Wales will be quite happy with the group they’re in, I’m sure of it, and who knows what sort of progress they’ll make between now and the rest of the French tournament which I’m sure they’ll qualify for. And maybe do brilliantly out in France, who knows. But at the end of it all, while it’s a draw where I think the teams will take points off each other, I’m happy enough to be in it.

He said that he felt that things had worked out well at both ends of the group with sixth seeds Georgia having the potential to spring a surprise on somebody in Tbilisi and Wales (who, as it happens, the Georgians have beaten on each of the three times that the two sides have met) despite being a form team at the moment, still preferable in his view to Germany; a feeling he said seemed to be reciprocated on the part of the World Champions, although perhaps not for the most flattering of reasons.

“We did speak to one of the German TV men who said they didn’t want to be in with us which is good news...(but) only because they’re fed up of playing us.”

O’Neill clearly felt that Austria were amongst the better second seeds to get despite the fact that they currently lead their Euro2016 group by four points and took four points from Ireland in the last Wold Cup campaign, when David Alaba got crucial late goals in both games, something that went a long way towards killing off the the team’s hopes of getting to Brazil last year and putting an end to Giovanni Trapattoni’s time in charge.

He reckons Serbia’s ranking is misleading, though, remarking that: “I think they’re a good side. They made a hash of qualifying for World Cup the last time when it was in their grasp. They were in same group as Belgium. They threw it away. This time they are not playing so well but their Under-20 side (which recently won the World Cup for that age group) is very strong.”

When the two sides last met, in Dublin in March of last year for a friendly game, the Serbs won 2-1 but when they last played competitively, Ireland and Yugoslavia, as they were still then, traded home wins in the Euro 2000 qualifiers. Against Wales in the Euro 2008 campaign, Ireland did better, winning 1-0 at Croke Park then drawing 2-2 away while the team’s record against Georgia is very good with the 2-1 victory earlier in this campaign, the most recent encounter.

Wales boss Chris Coleman expressed satisfaction with the draw. “It didn’t matter to me who we got,” he said. “It’s about us. I’ve got 100 per cent belief in our players against anyone but yeah, if you look at the teams that have come pout, it’s a juicy draw.

“Obviously, the Republic of Ireland, we know all about them, they’ve got good quality. We don’t have to talk much about Serbia (the Serbs beat Wales 6-1 during the last World Cup campaign), going to places like Georgia and Moldova is never easy but I can guarantee you that the other teams won’t be looking forward to coming to Cardiff.”