Not a personality leader, but it’s obvious he really cares about playing for his country

Wales and Real Madrid star Gareth Bale shows off his skills by scoring from behind the goal in training with his national team in 2015. Video: Football Association of Wales. Photo: Getty 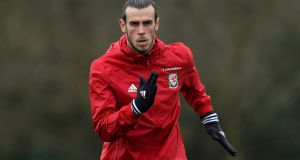 Wales player Gareth Bale in action during a Wales open training session ahead of their World Cup Qualifier against the Republic of Ireland. Photograph: Stu Forster/Getty Images

The Welsh FA are delighted with the slogan they have been using for the last couple of years: “Together Stronger”. It works better for them than “Stronger Together” did for Hillary Clinton. One reason they like the concept of Togetherness is that Wales are often dismissed as a one-man team.

Nobody is more irritated by the “one-man team” talk than Gareth Bale, the one man in question.

But what if all the best teams are, in a sense, one-man teams?

That was, at any rate, the view of Sócrates, the captain of Brazil’s 1982 World Cup team. He wrote that he was happy to acknowledge Zico as the best player in that team, because a team needs to know who the best player is.

“If you stimulate an internal competition you will never have a great team,” Andrew Downie quotes Sócrates in his new biography of the Brazilian legend. “If you don’t have a reference point, one great player, the best player, then the team is never going to play well. If you don’t have one man who’s better than the others in a football team, you have a bunch of guys who will be fighting each other. If you put all 11 at the same level, they won’t play; you have to have one who is better so that the others fight to get closer and the benefits are collective.”

It does seem to be the case that teams are more politically stable when everyone understands who the best player is. Look at almost any interview with a Barcelona player, and at some point they will mention that Lionel Messi is the best; even Neymar, who is entitled to have a pretty high opinion of himself, is scrupulous about acknowledging the supremacy of Messi, and he’s been doing it so long that it might even be time to take him at his word.

But is it true that a team with one undisputed chief on the field plays better than a team with two or more stars, any of whom could potentially think of themselves as the top dog?

On the other hand, Wales used to have a great player who was clearly better than everyone else in the squad, but Ryan Giggs somehow never had the same inspirational effect on his team-mates. The problem was not really that the supporting Welsh players of previous generations were not as good as Bale’s current team-mates.

The Wales squad of 15 or 16 years ago, when Giggs was about Bale’s age, had players like Gary Speed, Simon Davies, Robbie Savage, Craig Bellamy and John Hartson, who compare favourably to Aaron Ramsey, Joe Allen, Joe Ledley, Hal Robson-Kanu and Sam Vokes.

The problem was that Giggs missed too many matches. He played for Wales for 17 years – retiring six seasons before his club retirement – and in that time he won only 64 caps. Craig Bellamy played two fewer years, suffered more injuries than Giggs, and won 78 caps.

Giggs played for Wales on average 3.7 times a year. For comparison, Robbie Keane played for Ireland 7.68 times a year on average. That’s why nobody ever doubted Robbie Keane’s commitment to representing his country, and it’s also why Giggs could never quite convince people that he was as serious about international football as he was about Manchester United.

So it’s not enough just to have a great player. That player also has to care deeply about the team. You don’t have to watch Gareth Bale playing for Wales for very long to see that he really cares about playing for Wales. Now in his 11th year of international football, he has already got more caps than Giggs.

The personality leader is the talker, the one who gets everyone else motivated. Sometimes they are the same player – Keane with Ireland would be a good example – but usually not. At Ancelotti’s Madrid, the technical leader was Cristiano Ronaldo, with Bale a mere member of the supporting cast, and the personality leader was Sergio Ramos.

For Wales, Bale is the undisputed technical leader. He’s not a personality leader – remember that despite being by far the best Welsh player of his generation, and a two-time Premier League player of the year, Bale spent the first few years of his career believing he was a full-back.

If Bale’s ego were anything like as gigantic as his talent, he would have been demanding to be at the centre of things from the beginning. He has ended up in a central attacking role for Wales, but it’s been a natural progression, rather than a privilege he has demanded. If Ireland stop Bale they will probably beat Wales, but if Bale is in the mood to do damage, there is not much Ireland can do about it.