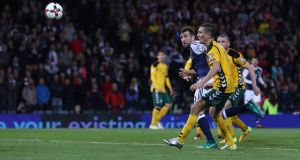 Substitute James McArthur rescued a World Cup point for Scotland with a late headed equaliser against Lithuania at Hampden Park.

Scotland made an edgy start against the fifth seeds and fell behind in the 59th minute when Fedor Cernych got away from Grant Hanley with the help of a one-two and finished clinically.

The point could prove crucial but failure to add to four previous home wins against the Baltic nation puts pressure on Scotland ahead of Tuesday’s game in Slovakia and next month’s clash with England at Wembley.

Gordon Strachan kept faith the same team that started the campaign with a 5-1 victory in Malta, which meant Chris Martin retained his place up front ahead of Steven Fletcher and Leigh Griffiths, who missed the previous game through injury.

But there was little sign of the continuity translating into any rhythm to Scotland’s early play.

Lithuania – who came within 40 seconds of beating Slovenia in their opener – pressed high up the park and looked sharp on the ball in the opposition half in the opening stages.

Scotland did threaten after left back Andy Robertson twice won free-kicks following positive runs, the second of which was halted by a forearm smash from Egidijus Vaitkunas who was fortunate to escape with a yellow card. Hanley and Callum Paterson headed wide from Matt Ritchie’s deliveries.

Scotland created their first chance from open play when Martin hooked a Robert Snodgrass cross beyond the far post under extreme pressure from Vaitkunas. Martin showed some good touches as Scotland began to improve in possession.

Ernestas Setkus almost spilled Barry Bannan’s strike towards Martin, but there was a warning at the other end when Vykintas Slivka got a free header but could not hit the target.

Oliver Burke had made an erratic start but he caused concern among the visitors with a couple of powerful runs. However, Bannan got away with a risky sliding tackle in his own box as the half-time whistle approached.

Darren Fletcher’s 75th Scotland appearance ended at the halfway stage because of injury and Lithuania came close 90 seconds into the half when they got plenty of bodies forward to carve out a chance for Arvydas Novikovas. The winger got outside former Hearts team-mate Paterson but David Marshall stopped his angled shot before his defence finished the clearance.

Scotland soon put the pressure on, with Robertson again proving the catalyst. The Hull player first cut the ball back for club-mate Snodgrass, whose shot was headed clear with the keeper beaten.

The left back then delivered a brilliant cross for Martin, who headed inches wide of the far post.

James Forrest came on for Burke but Scotland soon fell behind. Cernych held off Hanley and played a one-two with Slivka which gave him time to drill the ball inside Marshall’s near post.

Scotland had an instant chance to level when Robertson overlapped again and drilled a cross which Setkus palmed straight to Forrest, but the Celtic winger drove wide from 10 yards.

Griffiths came on in the 71st minute but Cernych almost finished the game off when he again got clear of Hanley after two team-mates helped on a long ball, but he volleyed just wide from 18 yards.

Griffiths got his chance in the 79th minute but sent a free header straight at Setkus following a Snodgrass cross.

The visitors wasted time at every opportunity as they eyed their first win in five visits to Hampden.

But McArthur nodded in from six yards after Hanley had headed on Paterson’s long throw and Scotland threw everything at their opponents during five minutes of injury time.

Griffiths was barged over as he chased a long ball but no penalty was forthcoming and a desperate goal-line clearance denied the Scots a last-gasp own goal.