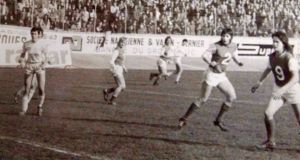 Even for today’s generation of female Irish football internationals, the opportunities to play the game on a full-time professional basis, and make a decent living from it, remain limited enough. If you were born in 1956, though, the prospect of making a career out of football must have seemed unimaginable.

But that is what the remarkable Anne O’Brien managed to do for 20 years, the Inchicore woman leaving Ireland as an 18-year-old to join Stade de Reims in the north of France, before moving on to Italy where she played for a string of clubs up to 1994, including Lazio, Napoli and AC Milan.

O’Brien died in her adopted home of Italy last month following a brief illness, just eight months after her family had travelled to Rome for a surprise party for her 60th birthday.

“We were all there at the end for her as well,” says her brother Tony. “The family was so proud of her, and the people of Inchicore were too.”

Football was and remains a family passion, cousins John Giles and Jimmy Conway both internationals in O’Brien’s youth, her nephew Ger O’Brien now captain of St Patrick’s Athletic. She was a gifted middle-distance runner too, but football was her first love, most of her childhood spent playing with the boys on the streets around her Inchicore home.

“I remember being given a doll at Christmas – I didn’t want a doll, I wanted an Annie Oakley set or a football,” she told Ger Gilroy on Newstalk’s Off the Ball two years ago. As she proved in later years, O’Brien was a bit of a sharpshooter herself, forging a professional career that saw her win three French and five Italian titles, as well as Italian cup winner’s medals.

It was in 1973 when that previously unimaginable opportunity came her way, her performance for the Dublin All-Stars against the visiting Stade De Reims, at that point the leading women’s club team in the world, earning her an invitation to play for them on the rest of their Irish tour. She did enough to earn herself the offer of a contract.

She won three successive league titles with Reims during her stay, her performances earning her national recognition. “She even finished third in their sportsperson of the year awards, behind Bernard Hinault [the legendary cyclist] and a boxer. She travelled the world with them, she went over in February and by October she was in the Caribbean on tour for a month. She played in big stadiums in Haiti, Guadeloupe and Martinique in front of big crowds.”

Then it was on to Italy where the women’s game was at its strongest at that stage. She had been semi-professional in France, but Lazio in Rome offered the chance to become a full-time player.

“Italy was where the money was, you could make a few bob,” says Tony, “and like France she settled in well and learnt the language.”

It was an Italian career that spanned three decades during which she enjoyed ceaseless success with Lazio, Trani, Lazio again, Modena, Napoli, Prato, Reggiana and Milan, her son Andrea born while she was at Modena.

“She breast fed him before the match and breast fed him after,” says Tony, who travelled regularly to watch her play and kept every newspaper clipping and photo of his sister that he could find over the years, all of them now safely stored in her Milan kit bag. Along with all the postcards she sent her mother from her global travels.

She retired in 1994, two years short of her 40th birthday, qualified as a coach, had spells with Milan’s youth and Lazio’s senior teams, worked with the Italian Football Federation’s underage set-up, before focusing on coaching children.

In later years she took up child-minding, alongside running a soccer school, to pay the bills.

“She’d take the kids down to the beach in Rome and coach them, she’d have the ball up on her head and she’d put it down her neck, down her back. She still had it.”

In January, her family presented her with those caps at her party in Rome. “She was delighted with them,” says Tony. “She was so proud.”

Her son Andrea will bring her ashes back to Dublin next month. “We’re hoping to bury her with my mam, that’s what she wanted. We’re bringing her home.

“Some of her last words were to Andrea, ‘write a book about me, son’, she said, and she smiled.”

It would be a life story like no other.

The Football Association of Ireland will pay tribute to O’Brien before next month’s World Cup qualifier against Georgia in Dublin.

Decision on overseas fans at Olympics expected later this month 20:45
Chelsea’s resurgence continues as they brush past Everton 20:29
Mullins string in fine fettle as they notch up a Leopardstown treble 20:25
Nothing of any concern found in inspection of Gordon Elliott’s stables 19:16
Reanne Evans and Ng On-yee offered professional tour cards 18:36