Ireland under-21s must avoid slip up in Iceland 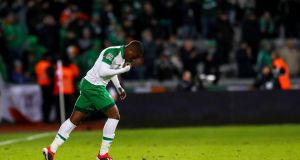 Southampton striker Michael Obafemi is set to make his first start for the Republic of Ireland Under-21’s in Iceland on Tuesday afternoon as Stephen Kenny’s side reach the midway point of their European qualifying campaign.

Regardless of the result in Reykjavik, Ireland will stay top of Group One although top seeds Italy have games in hand.

If they are realistically to challenge the Italians for the one automatic qualifying spot for the 2021 finals, a slip up on the artificial surface at the Viking Stadium has to be avoided.

Kenny had lost Aaron Connolly to the seniors before Troy Parrott got sent off in last Thursday’s scoreless draw against Italy. He does, however, have a third striker available to have featured for an English Premier League club this season.

Obafemi (19) is in the strange position of having already won a full cap before his Under-21 bow as a substitute in the Italian stalemate.

Kenny’s fondness for adopting a formation with one striker means he’s unlikely to dislodge Adam Idah but will instead operate from the flank. Parrott occupied that role before he was dismissed for a second booking at Tallaght Stadium.

Iceland, as third seeds in the group behind Italy and Sweden, had enjoyed a similarly fruitful start to the campaign until the weekend. They matched Ireland’s win over Luxembourg (3-0) and Armenia (6-1) only to ship a heavy 5-0 defeat in Sweden.

Although they are fourth seeds, Ireland will be confident of making it 13 points from a possible 15 from the first half of the series.

“We had set out to get six points from this double-header but need four at this stage,” said Lee O’Connor, Kenny’s ever-present right-back. “The depth of disappointment in the dressing-room from the Italy draw shows how far we’ve come as a team under Stephen. We had the chances to beat them.

“Now it’s about getting our winning run back. Iceland is a huge game to stay in the qualification hunt. This will be a different game to Thursday. It certainly won’t be as loud as Tallaght.

“However, a game is a game and we’ll be up for this challenge.”

O’Connor was surprisingly part of the Irish player movement in the last transfer window, ending his stay at Manchester United for a move to Scottish champions Celtic.

The Waterford man had been progressing nicely at Old Trafford, training with Ole Gunnar Solskjaer’s squad at the end of last season, yet opted to accept Celtic’s offer of a four-year contract following a conversation with Neil Lennon.

“I always wanted to play for Celtic,” admits O’Connor. “From speaking to the manager, he told me how much of a family club it is and that was confirmed by the other Irish lads I know there.

“It was difficult to leave United but it was purely a football decision. I want to play in Celtic’s first-team. I had four great years at United, moving over from Waterford at 15, yet I had to think about my career.”

Clock ticking for Jorginho to force his way back into Lampard’s plans 22:30
Tottenham take the gift of Keane’s own goal and grind out the rest 22:23
PGA Tour cancel plans for fans to attend Memorial Tournament in Ohio 21:01
Hatton you heard, it’s Tyrrell’s time despite DeChambeau’s dominance in Detroit 16:20
England confirm three-match ODI series against Ireland in Southampton 15:49

1 Tipping Point: DeChambeau’s transformation raises questions, but who will ask them?
2 Ken Early: Resurgent United can be the top team – in Manchester
3 Tottenham take the gift of Keane’s own goal and grind out the rest
4 Matt Williams: Six Nations must recognise the desire for revolution outside Europe
5 Monica Seles: The warrior queen who could have been the best ever
Real news has value SUBSCRIBE
Crossword Get access to over 6,000 interactive crosswords