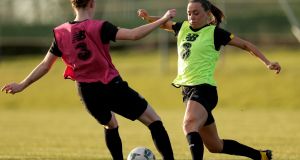 Having slipped up badly in Greece, Ireland need a win in Tallaght on Thursday if they are stay securely on course for second spot in their European Championship qualifying group.

Coaxed back out of retirement for this game and the one in Montenegro next week, Áine O’Gorman observed the other day that it has tended to be in the key games just like this one, against their most obvious rivals, that Ireland have let themselves down in previous qualification campaigns.

Their last qualification bid was killed off just about this far in by back to back defeats by Norway who, to be fair, actually went on to win the group. But the one before that was fatally undermined by two losses at the hands of a far more ordinary-looking Finland side.

Obviously, Vara Pauw’s side has already done a bit better than that but the injury-time equaliser by Anastasia Spyridonidou and, in particular, the way it was conceded, made the draw out there feel more like a defeat on the day.

Now, it just seems like it has removed the team’s room for manoeuvre with Pauw acknowledging that anything less than three points will make securing a play-off spot “more complicated”.

Germany, of course, who Ireland face for the first time next month, are powering their way towards top spot but Greece, as it happens, are not the group’s second seeds. Ukraine, who are, have no points at all from three games but two of those were drubbings at the hands of Martina Voss-Tecklenburg’s side and the narrowness of their defeat in Dublin suggested that they might yet pose a threat in the race for second place if they can now win their more winnable games and Ireland do not.

The Greeks showed character to come from behind in November although there was some irritation within the Irish camp at what was regarded as unexpected levels of gamesmanship. A certain amount of relish has been evident this week at the prospect of getting another crack at the visitors.

The loss of Megan Connolly, who Pauw says would have been absolutely central to her selection, comes as another significant blow after the earlier injury to Megan Campbell (whose Manchester City team-mate Tyler Toland seems to be out of favour) and leaves Pauw without important players in key areas of the pitch.

Ireland are still in better shape than they were four months ago, however, and the coach sounds optimistic about the outcome of a game in which Ireland will aim to play on the front foot as they pursue a crucial victory.

“We consider this a must-win game if we are to secure second place in the group,” says Pauw. “We know a lot about them and we are ready for this test, which will be different as we have more of our players available to us this time.”

There is some talk of a surprise in terms of her team selection or tactics but Pauw declines to elaborate and it seems hard to imagine that there will be any hugely radical change of approach from the Ukraine game in which the home side played very well for stretches.

All three of the main players involved in that night’s best goal – Denise O’Sullivan, Katie McCabe and Rianna Jarrett – are available here and so the attacking side of things certainly has potential.

Ireland, though, need to resist their tendency towards disastrous slip-ups on the defensive side with two that night giving their visitors the distinct impression that there was another goal there to be had if only they maintained their pursuit of it. It is, as they always say, the hope that kills you. That may not, of course, be quite the way ‘they’ meant it.

As ever, meanwhile, the FAI has been battling to put bums on seats for the game and after their attempt to paper the town with free tickets backfired on them for the Ukraine game when bad weather played a part in many of the recipients opting to tune in on television instead, they have looked to sell more in the hope that the higher level of up front commitment will translate into bigger numbers on the night. As of yesterday there were upwards of 5,500 gone, although a portion of those are still ‘comps’, and Pauw issued a last minute plea for people to come out and fill the remaining 2,000 or so seats.

“We need the support of the fans,” she says, “and we want them to be loud, because that gives the players a real boost during difficult moments in the game. It is crucial that we get the three points on Thursday against Greece.”