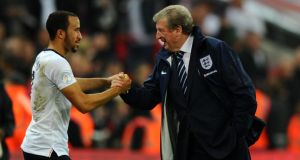 England striker Wayne Rooney insists manager Roy Hodgson did “nothing wrong” in making a joke about a monkey in space at half-time of Tuesday night’s game against Poland.

Hodgson has issued an apology if the joke, which was intended to convey the need for England to play the ball more to Andros Townsend, had caused any offence to the player concerned or anyone else.

The word ‘monkey’ can in certain contexts have strong racist connotations. The story was widely reported in the British national newspapers today but Rooney insisted the incident had been blown out of all proportion. He tweeted: “Seen the story on roy this morning. He done nothing wrong. This is ridiculous.”

Hodgson said in a statement: “I would like to apologise if any offence has been caused by what I said at half-time.

“There was absolutely no intention on my part to say anything inappropriate. I made this clear straight away to Andros in the dressing room. I also spoke to Andros again on Wednesday. He has assured me and the English FA he did not take any offence, and understood the point I was making in the manner I intended.”

Townsend’s father Troy works for Kick It Out as its mentoring manager, and it is understood the anti-discrimination group is aware of the context in which the joke was made.

The joke is one that became popular in US space agency NASA in the 1960s and 1970s after it sent monkeys into space before humans. One version of the joke is that the first time NASA sends a man up into space a monkey goes with him and does all the skilled technical jobs inside the rocket. Finally the astronaut gets frustrated and radios NASA to ask what he should do. NASA replies: “Don’t touch anything — just feed the monkey.”

It is believed Hodgson was trying to illustrate the need for England’s defenders to play the ball early to Townsend while he was in space on the flanks.

He said on Twitter: “Someone leaked it and i bet 100 per cent confident that no player was offended, not one. “If they are, do explain why. Racism is hard enough to keep on the agenda as it is without making everyone think a legitimate space tale should be a cause for offence.

“Demeans every anti racism campaigner by having cheap pop at RH who said NOTHING WRONG. Makes campaigners seem over PC & petty. They’re not.”

The English FA has been sensitive to any allegations of racism after John Terry was stripped of the England captaincy and later banned for four matches for racially abusing QPR’s Anton Ferdinand.

1 St Michael’s conveyor belt showing no signs of slowing down
2 Glasgow slam European door shut on Munster
3 Premiership Rugby confirms Saracens will be relegated
4 Man City slip up at home to Crystal Palace
5 Welcome to Iten in Kenya – home of champions and cheats
Real news has value SUBSCRIBE
Crossword Get access to over 6,000 interactive crosswords