Hibernian prepare the ground for return of Anthony Stokes on loan 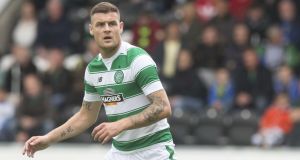 Anthony Stokes: money could be a factor in deciding which club he joins on loan. Photograph: Jeff Holmes/Getty Images.

Celtic yesterday agreed terms for the loan of the Irishman to Dundee United, who they play this evening, but Stokes is said to prefer a return to the club he left for Parkhead five years ago.

Having already rejected the opportunity to work again with John Hughes, now manager at Inverness Caledonian Thistle, he is reported to have indicated his reluctance to join the SPL strugglers.

“We have made an approach to Celtic and spoken to the player,” confirmed United manager Mixu Paatelainen. “But I don’t how things will pan out. It’s up to the player to decide. He’s got loads of options. Obviously we’re a bottom-of-the-table club. I don’t think when you look at the league table that we are the favourites to get him.”

Celtic boss Ronny Deila has said that his main priority is to see Stokes get game time with a view, he says, to returning and playing for him again.

Money will be a factor, though, with the club he joins expected to pay as much as possible of his €11,000 a week wages.

Brentford boss, Dean Smith, has confirmed that the club has rejected an offer for Irish midfielder Alan Judge from Burnley just days after Sheffield Wednesday were similarly rebuffed. “I’d hope to keep Alan,” said Smith, “he’s been a big player so far this season.”

Bristol Rovers have completed the signing of former limerick striker Rory Gaffney. The 26 year-old who has scored five goals in seven games while on loan from Cambridge United has agreed an 18-month contract.

Joe Murphy has extended his contract with Huddesfield until 2017. The 34 year-old joined from Coventry at the start of last season.