Greece leave Ivory Coast out in the cold 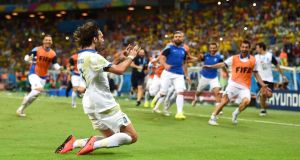 Greece stubbornly refuse to enter the spirit of this liberating World Cup or give up their place in it. Water-tight, compact and on the scoresheet when it mattered, they scripted another tale of lost opportunity for the Ivory Coast and consigned the Elephants to the graveyard with a 93rd minute penalty from Georgios Samaras. For the lauded generation of Didier Drogba and co, on their knees when the Ecuador referee pointed to the spot in injury time, it is all over.

The celebrations may not wash far beyond the Aegean Sea but credit coach Fernando Santos for his steadfast belief in a style that has begun to grate with Greece’s own supporters. Though not on nights like this. He would not bow to pressure for change and maintained a side without a World Cup goal to their name before the final group game would deliver. He was correct on both counts, and there was more to Greece’s progress into a last 16 meeting with Costa Rica on Sunday than resilience.

Santos’ team were simply better. They hit the woodwork three times, led through substitute Andreas Samaris but looked to be out when Wilfried Bony levelled in the 74th minute. That would have put Ivory Coast through but, in the dying seconds, Giovanni Sio clipped Samaras in the area and the former Celtic striker picked himself up to send Greece through.

Sabri Lamouchi finally gave the Ivory Coast what they wanted and started Didier Drogba for the first time at this World Cup. It transpired Ivory Coast were not the only ones craving the former Chelsea striker as his every touch and appearance on the stadium screens triggered mild hysteria among the mostly Brazilian crowd. But he had to be more than a novelty act.

Drogba released Gervinho into threatening positions twice in the opening 15 minutes but Kostas Manolas was alert to the danger on both occasions.

Wilfried Bony’s replacement would also have had a clear sight of goal but for a badly over-hit pass from Yaya Toure after the midfielder powered through the Greece defence.

Fernando Santos’s game-plan did not vary greatly under the pressure to win and, by extension of that aim, finally register a goal in Brazil. There were minor tactical shifts, Georgios Samaras moved in from the left to lead the attack and Greece went from 4-1-4-1 to 4-4-1-1, but patience was again their virtue. Greece were content to wait for a set-piece opportunity, a counter-attack or a mistake from a careless Ivory Coast defence. Option three did not fail them.

Greece’s rhythm was badly disrupted by injuries with two players limping out inside 24 minutes. First Panagiotis Kone exited with an apparent hamstring strain then their goalkeeper, Orestis Karnezis, was forced off following lengthy treatment on a back injury. He had been extended only once when saving at the feet of Drogba, although the Ivory Coast captain did not make contact. Once they regrouped, however, Greece were the more purposeful, effective side and could have taken the lead before the goal from Andreas Samaris, Kone’s replacement.

Jose Holebas confirmed Greece have licence under Santos by leading a break from left-back after an Ivory Coast corner was dealt with. It was three on three as he exchanged passes with Samaras and, as Kolo Toure raced across to cover, the defender struck a first-time shot from the edge of the area that cannoned off the crossbar. The captain, Giorgos Karagounis, also tested goalkeeper Boubacar Barry with a low free-kick from 20 yards.

Ivory Coast failed to heed their warnings and gifted Greece a vital breakthrough minutes before the interval. And what a gift. Taking a routine pass deep in his own half, Cheik Tiote under-cooked his touch towards Kolo Toure and Samaris intercepted. The Newcastle midfielder already had his head in his hands as Samaris played a one-two with Samaras and swept a nerveless finish over the advancing Barry.

Santos’s side continued to prosper on the counter after the restart and were desperately unlucky to hit the bar for a second time when Karagounis unleashed a shot from almost 30 yards that left Barry flailing but struck the woodwork. Lazaros Christodoulopoulos also had a decent chance after cutting inside Souleymane Bamba but dragged his effort wide and Vasilis Torosidis’s cross hit the outside of the post late on.

By then, Bony had thrown a lifeline to Ivory Coast. The Swansea City striker was summonsed from the bench with half an hour remaining as Lamouchi went for broke. Whenever they did create an opening the Greece central defender Manolas usually intervened but Ivory Coast pressure finally prevailed when Solomon Kalou released Gervinho inside the area. The Roma forward squared first time and there was Bony to slide a trademark finish inside the near post. Guardian Service