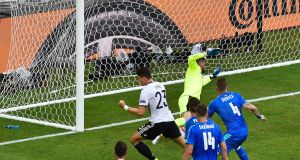 Germany’s forward Mario Gomez scores against Slovakia’s goalkeeper Matus Kozacik during the Euro 2016 round of 16 football match between Germany and Slovakia at the Pierre-Mauroy stadium in Villeneuve-d’Ascq, Lille. Photo: Denis Charlet/Getty Images

Germany claimed their place in the last eight of Euro 2016 with all the smoothness that might be expected of world champions in a one-sided game in Lille, once again demonstrating they have few equals for imaginative passing and clever movement all over the pitch.

Joachim Löw’s side will face sterner challenges than Slovakia as Spain or Italy lie in wait in the next round, but after four games without a goal conceded the Germans’ progress already looks ominous, especially with the goals scored column now looking a lot healthier.

The relative lack of German goals in the group stage, none against Poland and only one against Northern Ireland, raised eyebrows in certain quarters, though they were up and running after just eight minutes here. Jérôme Boateng was the unlikely scorer, lining up a volley from a couple of yards outside the area when a corner was cleared straight to him and nailing it to beat Matus Kozacik low to the goalkeeper’s right. There might have been the slightest of touches from Milan Skriniar along the way but not a significant deflection. The shot was always on target, and a player claiming his first international goal after 63 appearances does not need any nonsense about it being awarded to someone else.

It looked as if Slovakia might go from bad to worse when Martin Skrtel earned a booking and conceded a penalty four minutes later, but Mesut Özil granted him a reprieve with a spotkick that was too easy for Kozacik to save. Skrtel had been penalised for tugging back Mario Gomez as he tried to reach a cross from Thomas Müller. It was hardly grappling of the standard that Skrtel gets away with for Liverpool most weeks in the Premier League, but the referee was probably correct in deciding he had illegally knocked his opponent off balance and pointed to the spot. Özil seemed unable to decide between power and placement and ended up sending in a gentle penalty at a comfortable height for the goalkeeper to reach.

Özil had a chance to make amends from a Gomez knockdown midway through the first half, but drilled a first-time shot inches wide. The Arsenal player then supplied a cross from which Müller headed over, but Özil was not quite as effective in slipping balls through for his forwards as he had been in the last match against Northern Ireland. Without his inspiration Germany went off the boil a little in the second part of the first half, even to the extent of allowing Juraj Kucka a headed chance that Manuel Neuer had to be at his acrobatic best to keep out, though the situation was redeemed when Gomez scored his second goal in two games a couple of minutes before the break.

In truth he could hardly miss after all the hard work was done by Julian Draxler, breaking through to the byline on the left then carrying the ball towards goal to leave Gomez the simplest of opportunities from inside the six-yard line. Slovakia might have been hoping to reach the interval with no further damage, but a two-goal margin was a fair reflection of German superiority. Marek Hamsik tried his best, but Mats Hummels and Boateng were always comfortable at the back.

That said, their perfect defensive record was put under threat when a misunderstanding offered Slovakia a chance on the break at the start of the second half. Initially they had a two-man overlap as the German backline struggled to reform itself, but they could not fashion a shooting opportunity in time and Kucka’s eventual effort went straight at Neuer.

The only worry for Germany as the second half followed the pattern of the first in becoming flat and directionless was that Müller’s tournament has still to take off. Löw has been going through some of his many forward options in France, giving pitch time to Draxler, André Schürrle, Mario Götze and Gomez, though Müller has remained a constant and he has yet to score.

It is always difficult to work out precisely what Müller brings to the German party if he is not scoring or assisting, and at times here he actually seemed to be slowing up a number of attacks. The impressive Draxler – when going forward at any rate – stole his space and some of his thunder with Germany’s third goal after an hour, punishing a misdirected clearance by Jan Gregus with a well-executed close-range volley. Draxler made way for Lukas Podolski shortly after that, to cheers of approval from German fans, and with Neuer operating as a sweeper close to the centre circle Germany played out the rest of the game making already-exhausted opponents chase the ball all over the pitch.

This was an easy victory, perhaps easier than some of the group-stage games, yet even so there was a sense that Germany were playing within themselves. While the next round will present much more of a test, there still seems to be room for improvement.