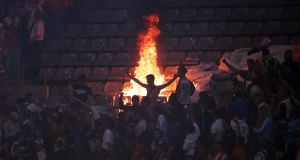 A fire is lit in the Olympique de Marseille supporters’ section during the Coupe de France final match between Paris Saint Germain and Marseille at the Stade de France. Photo: EPA

Serious questions have been raised about the ability of the French authorities to provide effective security at the European Championships after an attempt to use the cup final between PSG and Marseille over the weekend as a final dress rehearsal highlighted major shortcomings in the procedures.

Police and private security personnel overseeing the operation at the Stade de France on Saturday struggled to control the crowd of almost 80,000 as new access routes to the stadium were used and flares were let off inside the ground despite supposedly rigorous searches outside intended to ensure that no such items were smuggled in.

Interior minister Bernard Cazeneuve said that lessons would be learned from the clear failings of Saturday’s operation and that the required improvements to procedures would be made before the championships get underway at the stadium on June 10th. But the member of the National Assembly who represents the area in which the ground is located has suggested that France is simply not adequately prepared for the event.

Jean-Christophe Legarde highlighted, in particular, the problem of large crowds being channelled through a much reduced number of entrances so as to make the searches easier to administer. “I understand we have to make sure people are not bringing weapons in,” he said, “but during the Saint-Denis attacks (in November) nobody got in with weapons or bombs.

“In putting bottlenecks in place, we will have thousands of people clustered together. If you had a suicide bomber at one of the four gates, do you realise the panic there would be? We are not ready to organise an event in safe conditions.”

This is contested by tournament organisers and government officials although the head of the local authority that is in part responsible for security at the venue where Ireland play Sweden on June 13th and the final will be held July 10th admitted that the problems encountered over the weekend were “not acceptable”.

The significantly increased resources being devoted to stadium security since the November Paris attacks and more recent events in Brussels had been seen as going a long way towards minimising the risk at match venues and some French officials had suggested that the greater issue would be safety at less cordinated city spaces – public squares and the areas around train stations – but these problems have highlighted the amount of work that still needs to be done despite the deployment of hundreds of extra personnel at each game.

The cup final was the last major match to be staged at Saint Denis before the opening game. The FAI and senior members of the Irish management team have previously said that they have confidence in the measures being taken but the head of one of the French intelligence agencies suggested to a parliamentary committee that an attack of some sort is possible and even those charged with responsibility for running tournament security acknowledge that there simply cannot be any cast-iron guarantees of safety.

“It’s impossible,” Euro 2016 security chief Ziad Khoury told NBC in an interview this week. “Even now, I’m talking to you, something could happen in my building.”