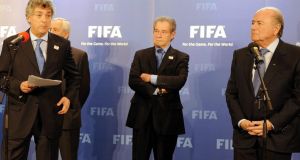 Three current Fifa executive committee members plus former member Franz Beckenbauer are under investigation by ethics chief Michael Garcia following his probe into World Cup bidding, it can be revealed.

Spain’s Angel Maria Villar Llona, Michel D’Hooghe from Belgium and Worawi Makudi from Thailand are among the names being looked at by Garcia for possible ethics code breaches, according to sources close to the world governing body.

Beckenbauer is also under investigation by American attorney Garcia along with Harold Mayne-Nicholls from Chile, who headed the inspection team which compiled reports into the countries bidding for the 2018 and 2022 World Cups.

Garcia and German judge Hans-Joachim Eckert, the chairman of the adjudicatory chamber of Fifa’s ethics committee, released a joint statement last week confirming a number of individuals were under investigation.

It is understood that Fifa president Sepp Blatter and Uefa president Michel Platini are not under investigation by Garcia.

Eckert’s findings into Garcia’s report on the bidding for the 2018 and 2022 World Cups, won by Russia and Qatar, did not even mention Spain and Portugal, though it is understood one line relates to that bid stating: “With regard to one specific bid team however, the report noted that the relevant federation was particularly un-cooperative in responding to the investigatory chamber’s requests.”

Villar Llona, who is also chairman of the Spanish FA, had been reluctant to even meet Garcia.

D’Hooghe, who was on the Fifa executive committee in 2010 along with Villar Llona, Makudi and Beckenbauer at the time of the World Cup vote, said he had “simply had to clarify some well-known cases” to Garcia.

D’Hooghe said his son Pieter’s move to take a job as a surgeon in Qatar’s renowned Aspetar sports medicine hospital in 2012 was entirely unrelated.

He said in a statement via email: “The nomination of my son was a purely medical decision, without any involvement of myself and without any relation with the bid.”

D’Hooghe also told the Daily Telegraph in a separate email: “I have given all the necessary correct answers and suppose my case is closed.”

In 2011, the Belgian confirmed he had accepted a painting from a senior figure involved in the Russian 2018 bid. He later described it as a “poisonous gift” and said it had no value.

A spokesman for Beckenbauer told German newspaper Die Welt he could not comment due to ethics committee regulations. The former German World Cup winner was suspended in June for refusing to co-operate with Garcia, before agreeing to do so.

In relation to Mayne-Nicholls, Garcia is looking at emails between the Chilean and Qatar’s Aspire Academy regarding the possibility of unpaid internships for family members.

The 53-year-old Mayne-Nicholls told Dubai paper The National: “As a committee, they have the right to ask all the questions they need to in order to be sure about the final decision that will be taken. The ethics committee needs to have a very clear picture about everything that happened in the 2018 and 2022 bids.

The joint Garcia-Eckert statement of November 20 also said that Garcia’s full report into his investigation into bidding for the 2018 and 2022 World Cups would be passed to Domenico Scala, the chairman of Fifa’s audit and compliance committee. That committee would determine how much of the information should be made available to Fifa’s executive committee.

Given that three members of the executive committee are being investigated by Garcia, it is unclear how much, if any, of the information contained in the report can be shared.

Earlier this month Eckert cleared Russia and Qatar to host the 2018 and 2022 World Cups saying rule breaches by the bidding countries were ”of very limited scope”.

Garcia responded by notifying Fifa that he intended to lodge an appeal against the decision due to ”numerous materially incomplete and erroneous representations of the facts”.

Fifa has also lodged a separate criminal complaint with the Swiss attorney general.