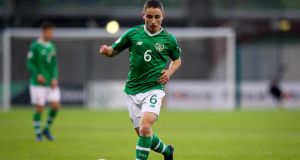 The youngest player in the Republic of Ireland Under-19 squad, 16-year-old Joe Hodge, delivered on the big stage by conjuring a late equaliser against Norway in their Euro finals opener on Monday evening.

Tom Mohan’s side were heading for defeat at the Armenia’s academy stadium following an early goal by Erik Botheim until the Manchester City midfielder drilled home a 20-yard drive with 10 minutes left.

Norway could have nicked it in the final minute through Mikael Ugland’s dipping volley only for it to rattle the post and Ireland held on for a precious point.

Their feat was all the more laudable given a sickness bug had been running through the camp, keeping Festy Ebosele and Ciaran Brennan out of the matchday squad.

Next up for Ireland is France on Thursday before they conclude the group by meeting Czech Republic on Sunday.

The draw keeps them in the mix to claim one of the two berths on offer into the semi-finals at the eight-nation showpiece.

“I think we deserved the point on the strength of our second-half performance,” said Mohan afterwards.

“The first 20 minutes was a rocky period because Norway pinned us back. They played with a high press and we found it very difficult to break out.

“We just felt our best chance of getting at Norway was down the sides by overload wide areas. That’s where the equaliser came from.”

Ireland paid for their early hesitancy by falling behind on eight minutes. Failing to clear Halldor Stenevik’s deep cross to the back back, they allowed Edvard Tagseth whip the ball back in for Botheim to sweep the cross into the net from six yards with a first-time volley.

Ali Reghba got on the end Ireland’s best chance of equalise in the first half, his charge from the half-way line thwarted only by a last-ditch tackle from Manchester City defender Colin Rosler.

Jonathan Afolabi forced Kristoffer Klaesson to his turn his ferocious shot around the post as Ireland gradually found their groove.

Matt Everitt added some zest to the attack following his introduction and the equaliser eventually came.

Neat work on the right wing by Reghba led to a a cross which Rosler only half-cleared. Waiting 25 yards to control the loose ball was Hodge who unleashed a crisp shot into the bottom corner.