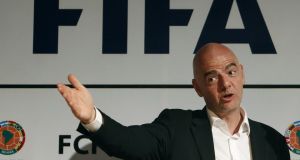 The new head of world football has been caught up in the sport’s corruption scandal because of documents that have been revealed by the Panama Papers leak.

Files seen by the Guardian will raise questions about the role Fifa’s president, Gianni Infantino, played in deals that were concluded when he was director of legal services at Uefa, European football’s governing body.

According to records, Uefa concluded offshore deals with one of the indicted figures at the heart of an alleged “World Cup of fraud” despite previously insisting it had no dealings with any of them.

The emergence of the contracts from 2003 and 2006, which were co-signed by Infantino, link Uefa for the first time to one of the companies involved in the huge unfolding scandal that has brought down former Fifa president Sepp Blatter.

Uefa has denied any wrongdoing by any of its officials or any other marketing partner.

It said the contracts were all above board. Fifa has previously insisted Infantino had no dealings with any of the officials currently under investigation – or their companies. Infantino said he was “dismayed” by the reports and “will not accept that my integrity is being doubted”.

The disclosures are based on the leak of 11m documents from the files of the offshore financial law firm Mossack Fonseca, which were obtained by Süddeutsche Zeitung and shared by the International Consortium of Investigative Journalists with the Guardian and other news organisations.

Infantino is the Swiss-Italian former Uefa secretary general who won the race to succeed the disgraced Blatter in February. The files show that in 2006, when he worked at Uefa, the organisation sold the rights for broadcasting its club competitions in South America.

The rights to the Champions League, the Uefa Cup and the Super Cup were acquired by an Argentinian company called Cross Trading. Cross Trading immediately sold on to broadcaster Teleamazonas for about three or four times the amount paid for them. The contracts covered the period from 2003 to 2006 and from 2006 to 2009.

Cross Trading is a subsidiary of a company called Full Play, which is owned by Hugo Jinkis. Last year in an unrelated matter, Jinkis was alleged by US prosecutors to have handed over millions of dollars in bribes and kickbacks to football executives to obtain and retain media and marketing rights.

Jinkis, along with his son Mariano, is under house arrest in Argentina.

Jinkis’s involvement in the deals with Uefa from a decade ago are set out in the Panama Papers. Cross Trading signed a deal with Uefa’s broadcasting and marketing partner, called Team. Infantino’s name appears on the contract as Uefa’s director of legal services.

According to the contracts, Cross Trading, which was registered in the tiny South Pacific tax haven of Niue, agreed to pay $111,000 for the exclusive rights to broadcast Champions League football in Ecuador between 2006-07 and 2008-09.

In the covering letter containing the fully executed contracts, Uefa states: “Congratulations on joining the family of broadcast partners for the 2006-2009 Uefa Champions League seasons … we look forward to working with you!”

Uefa insisted the TV rights deals with Cross Trading were all above board and it could not have known when they were signed in 2003 and 2006 that Jinkis would be involved in the scandal a decade later.

It said the rights were sold “pursuant to an open, competitive, tender process”, and that the offer from Teleamazonas/Cross Trading was 20% higher than the next best bid.

“There is no suggestion whatsoever of any Uefa official or marketing partner taking any form of bribe or kickback, whether in relation to this tiny deal, or any other commercial transaction,” it said.

Uefa added: “The TV contract in question was signed by Gianni Infantino since he was one of several Uefa directors empowered to sign contracts at the time. As you will have observed, the contract was also co-signed by another Uefa director. It’s standard practice.”

It is unclear why Teleamazonas paid so much for the rights, but one possibility is that Cross Trading simply made a huge profit on the deal. Local sources also confirmed that a similar agreement was in place three years earlier, when Teleamazonas bought a similar package from Cross Trading for a fee believed to be about $400,000.

Uefa reiterated that it received $111,000 for the Champions League rights over a three-year period and had no knowledge of any subsequent deal between Cross Trading and Teleamazonas. “The reason why Cross Trading appears as the contract partner in this deal is simply because Team was advised that Cross Trading had the mandate to act as exclusive buyer for all sports TV rights of Teleamazonas in the European area,” it said.

“Neither Team nor Uefa had any reason to believe that there was anything suspicious or untoward about an agency relationship between Cross Trading and Teleamazonas.”

It said any bilateral deals between Teleamazanoas and Cross Trading were “their business, not ours”. “We do know that Teleamazonas made the best offer for these FTA [FREE-TO-AIR]rights in Ecuador. And that’s why we took it.”

Uefa did not say why it had previously asserted that it had not had any dealings with any of the indicted companies or individuals.

But having checked through thousands of contracts, it said it could confirm that in addition to two contracts with Cross Trading for the Champions League and Uefa Cup in Ecuador from 2003 to 2006 and 2006 to 2009, it had also signed a Euro 2016 hospitality sales agreement with Traffic Sports Europe, a Brazilian company named extensively in the US indictment.

Fifa said that the matter was largely one for Uefa and that its assertion that “to the best of his knowledge Gianni Infantino had no dealings in his time at Uefa with any of the persons mentioned” was based on information received from Uefa.

A further statement from Uefa after this story was first published said: “Uefa is dismayed by certain stories in the media suggesting that there might have been untoward or improper conduct in connection with a television rights contract concluded with a company based in Ecuador in 2006.

“For the record, and as repeatedly explained to the explained to the media, there was never any suggestion that anything improper took place. These explanations have been conveyed to the media in a clear, reasonable, and perfectly transparent way. It is therefore all the more regrettable that, despite the explanations given, some sections of the media have chosen to misrepresent matters and mislead the public by suggesting or implying otherwise.”

A statement from Infantino, released after this story was published, said: “I am dismayed and will not accept that my integrity is being doubted by certain areas of the media, especially given that Uefa has already disclosed in detail all facts regarding these contracts.

“From the moment I was made aware of the latest media inquiries on the matter, I immediately contacted Uefa to seek clarity. I did this because I am no longer with Uefa, and it is they who exclusively possess all contractual information relating to this query. In the meantime, Uefa has announced that it has been conducting a review of its numerous commercial contracts and has answered extensively all media questions related to these specific contracts.

“As I previously stated, I never personally dealt with Cross Trading nor their owners as the tender process was conducted by Team Marketing on behalf of Uefa.

“I would like to state for the record that neither Uefa nor I have ever been contacted by any authorities in relation to these particular contracts.”

Fifa has been fighting on a number of fronts in recent months.

Mossack Fonseca has insisted it has strong due diligence protocols. “Over the last 18 months, we have reinforced our compliance department by hiring an additional 26 professionals to comply with new regulations as well as to conduct retroactive due diligence on all existing clients,” it said.

Contained in the Mossack Fonseca files are the details of contracts signed between companies controlled by Jinkis and allegedly corrupt Fifa executives named in the US indictments, including the longstanding secretary general of the South American confederation, Conmebol, Eduardo Deluca; the Conmebol president and Fifa executive Nicolás Leoz; and the Uruguayan former Fifa executive Eugenio Figueredo.

Infantino joined Uefa in 2000 and became secretary general in 2009. He in effect took over the running of the European confederation when Michel Platini was suspended by Fifa’s ethics committee over a £1.35m payment he received from Blatter in 2011.

Infantino chose to stand for the Fifa presidency himself and secured a surprise victory after convincing Fifa’s 209 member associations that he would repair its damaged finances and raise more money for football development around the world.

In the foreword to last month’s financial report, which revealed losses of £84.2m because of deserting sponsors and spiralling legal fees, he said it was to Fifa’s credit that it had acted to limit the damage to the organisation of the recent corruption scandal.

“By taking the necessary steps to support reform at the extraordinary congress in February, I believe that we have turned a corner and that Fifa is poised to emerge stronger than ever,” he said. “My time in office will be focused on helping our member associations to fully implement the reforms at all levels of the game to ensure we restore full confidence in Fifa among all of our stakeholders.”