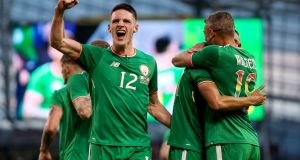 With his international future still up in the air Declan Rice is highly unlikely to be named in the Republic of Ireland squad on Thursday. Photograph: Laszlo Geczo/Inpho

With both players in contention to make club comebacks this weekend, Seamus Coleman and Robbie Brady are likely to be named on Thursday morning in Martin O’Neill’s extended squad for the Nations League games against Denmark and Wales.

Harry Arter could be back too - assuming the promised conversation with Roy Keane didn’t turn into an expletive filled attempt by the Corkman to have the midfielder get more out of himself - but the inclusion of Declan Rice would be major surprise given the firm belief in England that the 19-year-old will ultimately end up playing for them.

Gareth Southgate is also due to name his squad for the games against Croatia and Spain but Rice will have to complete an international transfer before he can play for the country of his birth - if that is the path he is now set on.

There is a suggestion, in any case, that the teenager is happy enough to lay low at a time that his international future has attracted so much attention and his new agent, Neil Fewings, has been openly doing battle with West Ham in a effort to secure a new contract that would hugely increase his salary from its current level of around €3,400 per week. The club were reported yesterday to have made the player a “final” offer of roughly €45,000 a week having opened the negotiations by putting €13,500 on the table.

O’Neil hinted last month that he believes Fewings, a senior agent with the prominent international firm, Wasserman, has been a prime mover in the player’s sudden uncertainty. That said Rice has clearly been encouraged too by the positive noises coming out of the England camp with Southgate fairly open about his interest.

In a much changed landscape, it is no surprise that Southgate wants to keep every option open but it says something about the position the England manager finds himself in that he is so eagerly pursuing a player who has already made three senior appearances, all friendly, for another country.

Perhaps even more surprising is his reported interest in Tom Cairney, the 27 year-old Nottingham born Fulham midfielder. Cairney has played twice for Scotland but has been left out of the squad for a Nations League this month that would resolved his future because, Alex McLeish says, he would not be ready to feature having only returned from injury to play the final 20 minutes of his club side’s defeat at Everton over the weekend.

Southgate, though, has been frank about his concern over the dwindling options open to him with young English players continuing to struggle to break through at Premier League level where the amount of home grown talent continues to decline.

The figures involved are stark. On the very first weekend of the Premier league way back in 1992, 175 of the 242 players who started games (some 72.3 per cent) were listed as English while the average figure for last season was just 33 per cent.

In the most recent round of games, last weekend, just 64 of the 220 players (29 per cent, a decline of about five or six players) to start games were officially available to the England manager. Only two of 20 clubs, Burnley and Everton, included a majority of English players; Chelsea had none while Arsenal and West Ham (excluding Rice) had one apiece.

There are few really clear patterns, although those with the biggest budgets are generally more inclined to shop overseas. Chelsea and Arsenal aside, England’s four representatives in the Champions League - Manchester City and United, Tottenham and Liverpool - started just 14 English players between them in the competition’s first round of group games a couple of weeks back, fewer than their German (17) or Spanish (16) counterparts though more than the four sides from Italy (nine) whose national team failed, of course, to make it to the last World Cup.

The phenomenon is, of course, increasingly widespread in less wealthy leagues too and Wolves under Portuguese manager Nuno Espírito Santo started more players from there over the weekend that Porto and Sporting combined. Three of the top four English clubs in terms of numbers of local players - Burnley, Bournemouth and Southampton - happen to have British managers.

After the senior team reached the semi-finals at the summer’s World Cup and with England enjoying enormous success at various underage levels over the last year or so, there has been a good deal of optimism expressed for the future. Yet speaking in August, Southgate expressed his frustration that members of Under-20 World Cup winning side have found it so difficult to get game time at their own clubs.

“For any player, playing football is important but even more so for young players . . . you want them to experience playing in big matches,” he said, adding that, “if they have proven themselves as any other young players in the world, then that opportunity has to be there.”

A handful have been getting more of a look in since with Bournmouth’s Lewis Cook and Everton pair Dominic Calvert-Lewis and Jonjoe Kenny all featuring at the weekend, the latter primarily because of Coleman’s injury. Many others are either forced to go out on loan or wait for a chance that might never come.

The situation goes a long way to explaining Southgate’s eagerness to have Rice, who would be the second youngest Premier League regular available to the England manager after Fulham’s Ryan Sessegnon if he did choose to defect, with the former Crystal Palace, Aston Villa and Middlesbrough defender admitting that he now increasingly finds himself weighing up other available options.

“I can’t rule out players in the Championship now,” he said, “as our pool is getting smaller and smaller.”

Ireland’s have actually not declined so starkly despite 47 nations being represented in Premier League starting line-ups at the weekend as compared with just 15 when the league started 26 years ago.

There were 12 Irish starters that opening weekend compared to six (including Rice) in the most recent round of games. Both are snapshots and the current figure would have been boosted had the likes of Coleman, Brady and perhaps James McCarthy been fit. But six of the 12 in that first season played for clubs that finished in the top four and O’Neill has just one senior player available to him - 31 year-old Jonny Hayes of Celtic, who has made just three appearances for the club this season - at a club playing group stage European football right now.

For Southgate it is not hard to see why Rice is seen as having potential for the future but his importance to O’Neill, who has continued to insist he remains hopeful the player will return, is very clearly about the here and now.