No hassle in Hoffenheim for Man City after Silva’s intervention

Guardiola’s side concede inside a minute but secure key win 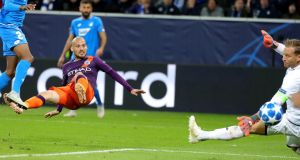 Manchester City are spluttering at the start of the Champions League and needed a late David Silva winner to beat Hoffenheim. A scrappy display followed the opening defeat to Lyon and while Pep Guardiola can point to his side’s spirit and three points there will be concern.

This was Hoffenheim’s home debut in the competition and Julian Nagelsmann’s side can be proud of knocking their heralded opponents out of their rhythm.

City endured a nightmare start, going behind after less than 60 seconds owing to a sleep-walking defence. When Ishak Belfodil ran on to a slick pass, Aymeric Laporte, City’s left-back for the match, was left trailing and the Hoffenheim striker beat Ederson expertly.

Cut to a stoney faced Guardiola and while City tried to absorb the shock Joelinton came close to creating a second, following a run down the right. Luckily for City his shot was hit straight into Ederson’s arms.

The equaliser came straight from the Guardiola playbook: Leroy Sané got in behind Hoffenheim and Sergio Agüero fired past Oliver Baumann.

Pavel Kaderabak was proving a danger. The 26-year-old winger’s pace was too much even for Kyle Walker and he might have won a penalty when going to ground.

Guardiola had selected as strong an XI as he could, which meant Agüero at centre-forward, despite a heel problem. The match was the first of “five finals” the City manager spoke of during the buildup and as Hoffenheim lost at the weekend and are 11th in the Bundesliga City began as favourites.

After half an hour City had established dominance as they peppered the Hoffenheim area with crosses and corners. Yet the tension was illustrated by Guardiola receiving a lecture from the referee, who was apparently unhappy at the manager for stepping out of his area.

When Hoffenheim managed to move forward they usually threatened, which will have worried Guardiola. Belfodil skimmed a ball that Ederson did well to collect, then Joelinton hit a fierce shot the keeper beat away.

Belfodil nearly scored again when the second half started with a near-mirror image of his opener but this time he flashed a shot across goal.

Ederson went close to being embarrassed when he charged out to clear and missed the ball.

Considering their callowness Hoffenheim were performing admirably. Yet when Sané was pulled down by Baumann it was a mystery why City were not awarded a penalty.

By the close Hoffenheim were hanging on as City pressed for a winner that came when Silva ghosted into the area to stab beyond Baumann.