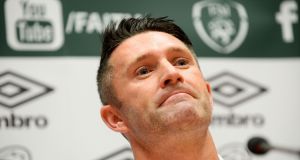 Republic of Ireland’s Robbie Keane during the press conference at the National Sports Campus at Abbotstown. Photograph: Caroline Quinn/PA Wire

There was the occasional set-piece yesterday as Robbie Keane mulled over the emotional challenge he is facing into as he prepares for what he knows will be his last-ever senior international game. But 18 years of playing came with 18 years of press and so, unsurprisingly, he delivered them like a pro. What else would you expect?

“Listen,” he said at one point, “it’s been an unbelievable career for me with the national team. I have played for many, many teams, I have put many, many jerseys on, but the Irish one always seems to fit me the best.”

Keane recalled the kid he was when capped for the first time aged just 17, and how he had struggled back then to be himself with the media when those he looked to for advice were telling him to steer clear or, failing that, keep schtum. How things have changed, with the now 36-year-old clearly at ease as he discussed his love for the game, the national team and the emotional wrench of leaving behind the point where the two collide on Wednesday night.

“I got thrown in at the deep end,” he says with a smile. “I had no clue how to speak to the media, I had no training. You have got people who look after you to try to protect you in terms of how you speak to people, and sometimes that wasn’t positive because they hold you back in terms of what you really want to say.

“The defining moment in my career, definitely, was when I was given the captain’s armband when I was 26 years of age. It changed my perception of how you deal with things. For me before that, my talking was done on the pitch [but) ]the responsibilities I have had as a captain have changed that. That was a big moment for me.”

There have been a few of them and moments too when his actions spoke louder than any words could have.

“When my father died, which was very, very tough for me,” he recalls, “about three days later I was on a plane going to play a game. When my son was born, two hours later I left the hospital in LA to come back and play for Ireland. I think that suggests to you that Ireland was always a very, very special place in my heart and it will continue to be that for a long, long time.”

At some point, he hopes, he might get the chance to have some hands-on involvement with the national team again, but the transition from player to coach will, most likely, be made somewhere else, with the most obvious contender the US. His stature within the MLS would, it seems, prove most effective at opening doors.

“People ask me this all the time,” he says. “But it’s very, very hard to say. I want to be coach but will that opportunity be in the States or England? Somebody in England might call me, somebody in Ireland might call me, I don’t know. So it’s almost like being a footballer again, waiting for that opportunity to come along and go somewhere you are valued or where you want to go.”

It might, in any case, be that he is back some day as Ireland manager; the notion certainly seems to hold some appeal, although both he and the FAI will recall the last time they appointed a rookie – so taking a little time first to learn the ropes seems wise.

In the meantime, he leaves on the best of terms, it would seem. Keane thanked Martin O’Neill yesterday for the offer of the opportunity to come in for this game and say a proper farewell, but the association must be grateful too that the country’s most prolific ever striker’s farewell will provide an added attraction on a night when the game against Oman would ordinarily not look like much of one at all.

When the two sides met a few years back in London, Robbie Brady marked his arrival on the senior international stage with a goal and the visitors may be more fondly remembered when the tale of tomorrow night is retold if Keane is on the mark too as he departs.

It would, apart from anything else, draw him level with the great Gerd Müller on 68 international goals, although the Dubliner is adamant that his own motivation will be a little more elemental; the same, in fact, as it has always been. “I don’t care about Muller’s record,” he says, “I’m chasing the next one because that’s what I’ve done since I was seven. I don’t know any different.

“And as soon as I’ve finished with the Ireland team I’ll chase the next one with the Galaxy. That’s just the way I’ve been brought up. It’s going to be a great occasion but at the end of the day I’m still going to go into that game to do the best I can for the Irish team. That’s the same feeling I’ve had since I was 17 years of age.

“I’ll enjoy the moment, don’t get me wrong, but as soon as that whistle goes, I’ll want to win the game.”

What more could we ever have expected?