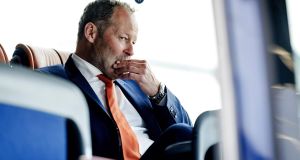 Netherlands manager Danny Blind: “The blame is on me. It falls firmly on my roof.” Photograph: Robin van Lonkhuijsen/AFP/Getty Images

Danny Blind has said he will think about his future as coach of the Netherlands after Saturday’s 2-0 defeat in Bulgaria left them facing an uphill struggle to qualify for next year’s World Cup in Russia.

The loss in the Bulgarian capital saw the Dutch drop to fourth place in Group A at the halfway stage of the qualifying campaign.

“The blame is on me. It falls firmly on my roof. I must now think about it and my employer will be doing the same,” Blind said.

“I’ve worked long enough in football to understand how it works. I must now look at myself in the mirror. It can’t carry on like this.”

Blind took over as coach from Guus Hiddink in a bid to resuscitate the Dutch qualifying campaign for the 2016 European Championships in France but a shock home defeat to Iceland in his first match in charge quickly ended any possibility of a revival.

Blind has won seven and lost seven of his 17 games in charge since taking over in 2015.

“I must be truthful to myself and to the KNVB [the Dutch football association],” the manager said.

“I must be convinced that I can get things right but we must also be honest and say that getting to Russia is now going to be a lot more difficult.

“I must think now whether I’m still capable of doing the job.”

It was the teenager’s mistake which led to a fifth-minute goal for Spas Delev, who scored a second 15 minutes later.

“If I have to now judge it, it was too early to put him in the team,” Blind added.

“It did not work out with Matthijs as we hoped it would and that’s my responsibility. But he will become a great defender.

“But the big players also did not bring to the game what we expected from them.”

Failure to qualify for the Euro 2016 finals was a major blow just two years after the Netherlands finished third at the 2014 World Cup in Brazil.

The Dutch next meet Italy in a friendly in Amsterdam on Tuesday. Their next World Cup qualifier is at home to neighbours Luxembourg on June 9th.