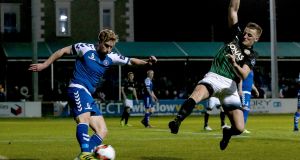 A goal from Dan Byrne garnered Bohemians a 1-0 win away to Drogheda United to stretch the Gypsies’ unbeaten run to four games and lift them into the top four in the Premier Division table.

Drogheda midfielder Seán Thornton missed the most clear-cut chance of the first half when shooting wide six minutes before the interval.

The only goal of the game at United Park then came for Bohemians on 75 minutes when central defender Byrne found the net with a downward header from Lorcan Fitzgerald’s free kick.

There was also just one goal in it at the Carlisle Grounds as Paul O’Conor struck early against Bray Wanderers to give Limerick their first win since the opening day of the season. Defeat sees Bray drop out of the top four as their search for a clean sheet continues.

Midfielder O’Conor struck after just five minutes, finishing with a crisp drive to the net after Rodrigo Tosi cushioned down a lay off from Tommy Robson’s cross with his chest.

There was late drama in Ballybofey as Finn Harps stretched their unbeaten run to four games with a 2-1 victory over Sligo Rovers, courtesy of a stoppage-time winner from Ciaran O’Connor.

Raffaele Cretaro put the visitors ahead just before the hour mark. John Russell threaded a pass through for Sligo’s veteran striker who calmly shot past Ciaran Gallagher in the Harps goal.

O’Connor then struck to win it for Harps four minutes into added time.

Awarded a penalty when fouled by Tobi Adebayo-Rowling, loanee O’Connor’s spot kick was parried by Sligo goalkeeper Micheal Schlingermann. But the 20-year-old scooped home the rebound for his fourth goal of the season to move Harps up to sixth place in the table.