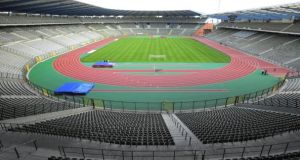 Belgium are scheduled to play Portugal at the King Baudouin Stadium on March 29th. Photograph: Getty

The Belgian national team have cancelled Tuesday’s scheduled training session out of respect for the victims of the Brussels attacks.

Belgium are set to play Portugal in an international friendly at Brussels’ King Baudouin Stadium on Tuesday, March 29th, but the fixture is now in doubt following suspected terrorist bomb attacks in the nation’s capital.

Brussels Airport was rocked by a double blast on Tuesday morning while another blast was reported by local media at a Metro station in the city. Several people are feared dead with many more injured.

A tweet from the Belgian team’s official account, BelRedDevils, read: “#tousensemble, our thoughts are with the victims. Football is not important today. Training cancelled.”

Manchester United winger Adnan Januzaj added: “Horrible to see what is going on in Brussels #Zaventem”