Alan Judge urges Coleman to be patient as he begins recovery 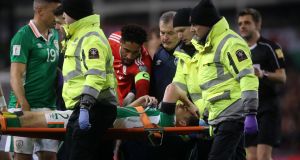 Republic of Ireland’s Seamus Coleman is stretchered off the pitch during the World Cup qualifier against Wales. Photograph: Niall Carson/PA Wire 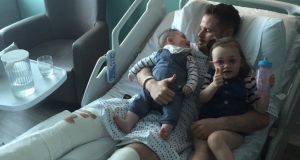 Alan Judge with his children shortly after suffering a double leg fracture. 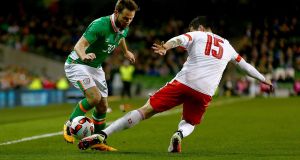 Alan Judge in action for Ireland against Switzerland in March 2016. Photograph: Donall Farmer/Inpho

Almost a year on from suffering a double leg fracture, Alan Judge admits it might yet be next season before he plays competitive football again. It took some time but he says he has now come to understand he cannot completely control his return date and insists that Seamus Coleman should not become hung up on his either as he embarks on his own road to recovery.

“Look, the first thing I’d say is that people with broken legs, they get back,” says Judge, who says he quickly recognised the nature of Coleman’s injury on Friday having suffered almost the same fate on April 9th last year when a challenge by Ipswich’s Luke Hyam broke both of the bones in his lower leg.

“There were times in my own recovery where I couldn’t walk properly and I thought I’d never run properly, but now I’m running fine. It just takes time. Everybody is different but he’ll be fine, especially with him being at a club like Everton where they have the top physios. Medical science these days is so advanced and everything helps.

“There are people talking about whether he will come back the same player but I wouldn’t listen to any of that. There are people who are just looking to say negative things for no reason. You learn that quite quickly.

“Everyone takes these things differently but knowing Seamus the way I do, he usually takes things head on and I can’t see this being any different. It’s been really difficult for me at times but I was back walking after eight or nine weeks. I had a machine that helped me increase the blood flow to the leg, I was doing cryo-chamber, I was doing anything at all that was available that would help with the healing of the leg.

“People suggest stuff and you think: ‘I might as well try it because what’s the worst that can happen? It won’t work?’ So, if I thought it had even a one per cent chance of something making a difference, helping in any way, I was doing it and I’m pretty sure that Seamus will be the same.”

He says the Irish skipper will take some consolation from having his family around him as he gets through the first two, particularly difficult , weeks of his rehabilitation.

“I was at home for two weeks before I started drifting back to the training ground and seeing people,” he says. “I had a lot of family around me for those two weeks and that was good, it’s really important to have people there for you, people who know you inside and out.

“He has a young family and that will be good for him, getting to see his kid every day. I said it before, I’ve said it to a few people, the one positive that’s come out of me breaking my leg, I’ve got to see a lot more over the past year of my family growing up. I’ve literally got to see them every day.”

Judge also believes that the opportunity to rebuild his fitness from scratch will ultimately pay dividends at some stage further down the line, perhaps even adding an extra few seasons to his career.

And he has learned to be less impatient about the progress he has been making. “When I first got it done my leg was healing really well for the first three or four months but then I just had a period where it didn’t heal at the same rate at all, which happens.

“There’s nothing you can do about that, it’s the body. Sometimes you have it in your head that it’s getting to the stage where it’s nearly fully healed but there are bits that haven’t and you need that extra bit of time. It took time for me to realise that it’s just different for everybody.

“You see with cruciate problems: some of them come back in six months and some of them don’t come back for nine, 10, 11 months. Everybody is different, every tackle is different; people twist and turn in different ways. My foot was firmly planted, Seamus was in mid-air, I’m not saying that that makes the time he will be out longer or shorter, but you just can’t say it’s going to be “this” amount of time. That’s the one thing that I’ve learned through the injury.

“And sometimes you have to accept that you are progressing even when you feel that you are not. I’ve kept videos of my rehab from start to finish and you can see the progress. You look back and realise, I am actually improving, I’m being too harsh on myself here.”

Judge returned to training with the rest of the squad a couple of months ago. It has gone well but there is, at this stage of the process, a psychological element that players are not entirely in control of.

“I haven’t missed a day of training,” he says, “there hasn’t been a single day where I’ve felt too sore to go out. When I first joined back in, though, you could see there was still a bit of a limp, that sort of stuff, which will happen because you’re coming back from a long time away and you’re having to rebuild everything again.

“I didn’t mind, I actually came to see it as a positive that I was getting to rebuild myself.You have to make sure that you don’t get too worked up about things because it will come. That’s what I’ve come to realise, it takes time, and what I’d say to Seamus is: Just don’t look for too much too soon.

“Now sometimes it’s like you know you’re fine but somewhere deep down in your mind there’s still something that’s making you protect the leg for no reason. But the more exposure that you get to football, the more that passes. I’ve seen the difference over time. Maybe one or two times when I’ve gone to stop, I’d kind of limp to a stop and I’d be asking myself: ‘why have I done that, I don’t feel any pain.’ But the more you work on it, the more exposure you get to football, the less it happens.”

If this week’s scan is positive, he will be in with the club physios the following morning to assess whether his leg is ready to withstand more contact in training with a view to a possible return before the summer. But there is not quite the same sense of urgency he might have felt a few months ago.

“If I feel right and they feel that I look right, that I’m not hiding away from anything in the game, then I’ll just look to get used to it, to have another few weeks of contact work. After that, if I manage to get a few minutes on the pitch [this season], that would be great but there’s only eight games left and you have to weigh that up. But then you think that the new season will be starting in what, three months, and you will be completely ready for it.”