Air of negativity surrounds England as they face Swiss

Visitors will be without Liverpool striker Daniel Sturridge because of injury 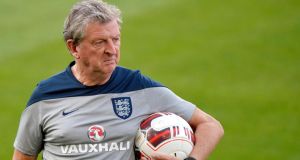 England manager Roy Hodgson said yesterday he would have liked today’s opening European Championship Group E fixture away to Switzerland – the team he was once in charge of – to have come later in the qualifying programme.

The air of negativity surrounding England after a poor World Cup in June, when they took only one point from three games, was not dispelled by defeating Norway 1-0 in a friendly on Wednesday.

While captain Wayne Rooney said the players were looking forward to “a nice game to play in”, Hodgson told the same news conference in Basel: “In an ideal world we would have chosen to play Switzerland, who on paper are certainly the major rival for the number one spot in the group, later on.

“We would have liked to have had a bit more time with this group of players to see how we can form them into the team we have in our head,” he said.

Switzerland, coached by Hodgson from 1992 until 1995, including the 1994 World Cup finals, are number nine in FIFA’s world rankings, 11 places ahead of England.

“If you look at the squad that we’ve chosen here, you see the talent and the quality of the players, their desire to step forward and do well for the country,” he added. “This will be a big test for them. I want to see how they come up to speed on that test.

England find themselves in the unusual position of underdogs against Switzerland, whose head coach, Vladimir Petkovic, is in confident mood ahead tonight’s game.

The Swiss national team have enjoyed an impressive resurgence in recent years, highlighted by their narrow exit at the last-16 juncture of this summer’s World Cup to eventual finalists Argentina.

That, as well as Switzerland’s home advantage, means they approach the St Jakob-Park clash as favourite for Petkovic’s first game as coach.

“It is a bit of a shift in roles,” Ottmar Hitzfeld’s successor said. “I like to be the favourite in a game, but the proof is on the pitch, on the field.