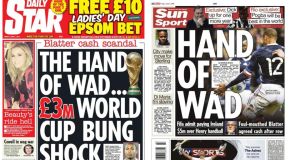 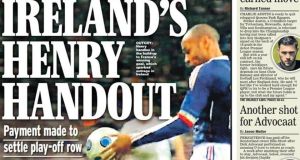 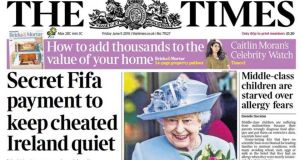 Recent developments about a €5 million payment made by Fifa to the FAI in light of Thierry Henry’s handball in 2009 have this morning caught the attention of newspapers and news sites around the world.

Commenting on the payment, Henry Winter writes in the Telegraph that accepting the money was a betrayal to Irish fans:

He says: “For those Irish supporters in Paris, that hush money must feel like blood money. For observers of Fifa’s notorious approach to smoothing out wrinkles in its precious tournaments this was another dispiriting case of money first, morals second, honest players and real supporters joint-third.”

The Star, Sun and Daily Express

Both the Daily Star and the Sun elected for the “Hand of Wad” pun, while the Daily Express went with “Ireland’s Henry Handout.”

The homepage of the Times and the front page of the print edition both lead with the story, carrying the same headline: “Secret Fifa payment to keep cheated Ireland quiet.” The report refers to the “hush money” that was “designed to stop Ireland suing over the unfair result.”

The Guardian is following all Fifa developments closely and running a live blog on updates, which is now focussing on the FAI payment and leading with the headline: “Fifa corruption crisis: pressure mounts on FAI over ¤5m payment - live.”

In France’s le Monde, the main report is currently the most read article on the site’s international news section.

The Independent has a straight report featuring on the site’s homepage: “Fifa paid FA of Ireland ‘€5m’ to not pursue legal action over Thierry Henry handball in World Cup qualifier”.

In the US, the Fifa scandal has been followed closely by the press. The New York Times main report was headlined:

It read:“The chief executive of Ireland’s soccer association said Thursday that Fifa had quietly paid compensation to his federation after a controversial hand ball by France’s Thierry Henry prevented Ireland from qualifying for the 2010 World Cup.”

1 Georgia and Fiji in line to join Six Nations sides in eight-team tournament
2 All in the Game: Jack fact-cheques money story
3 Malachy Clerkin: Sleep well Jack, you made us all happy
4 Andy Moran on moving on from a Mayo career that glowed golden to the end
5 The Offload: All eyes on Leinster’s academy intake
Real news has value SUBSCRIBE
Crossword Get access to over 6,000 interactive crosswords