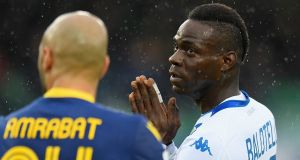 Hellas Verona have banned the leader of their ultras, Lucas Castellini, until June 2030 over racist comments he made about Mario Balotelli.

The Brescia striker was racially abused by monkey chants during Brescia’s 2-1 defeat on Sunday and the club has been handed a one-match partial stadium closure by Italian football authorities as punishment. The abuse caused Balotelli to kick the ball towards home supporters in frustration before he threatened to walk off.

An anti-racism message was broadcast at the Stadio Marc’Antonio Bentegodi but Castellini defended supporters after the match and made offensive remarks about Balotelli, who was born in Sicily to Ghanaian parents before being given up for adoption when he was three.

“Balotelli is Italian because he has Italian citizenship, but he can never be completely Italian,” Castellini said in an interview with Radio Cafe. “The chants came from only four people, who were only heard by the people who recorded the video. Balotelli only heard it in his own head. We also have a negro in our team who scored yesterday, and all of the Verona fans applauded him.”

Verona released a statement on Tuesday condemning Castellini’s comments and announcing that the supporter had been banned from attending home games for over 10 years.

“Hellas Verona FC announces that it has adopted a disqualification measure against Mr Luca Castellini, who expressed opinions that are seriously contrary to those that distinguish the ethical principles and values of our club. A suspension has been handed to the subject until 30 June 2030,” read the statement.

In the immediate aftermath of the match Verona’s head coach Ivan Juric said there was no racist element to any abuse directed towards Balotelli – a stance which was also taken by the club’s president Maurizio Setti – but Balotelli posted a video of Verona fans making audible monkey chants on Instagram, including a strong condemnation of their actions, which appears to have shifted their opinion.

On Tuesday, Gazzetta dello Sport published a motion sent to the Verona council by four councillors proposing that “the mayor and the legal offices of the municipality should take legal action against the footballer [Balotelli] and all those who attack Verona by unjustly defaming it.” The motion added: “It is no longer fair that Verona is put in the dock when, as in this case, nothing happened.” – Guardian