Pep Guardiola’s side went behind to Hoffenheim 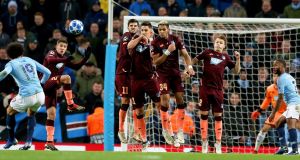 Manchester City stuttered but two goals from Leroy Sane gave them a fourth win of the group stage and cemented their position as one of the big favourites to win the Champions League this season.

Pep Guardiola made five changes to the team that lost at Chelsea on Saturday. Out went the injured David Silva and Fernandinho, plus Riyad Mahrez, Kyle Walker and Fabian Delph, who were all on the bench. Ilkay Gündogan, Nicolas Otamendi, Phil Foden, Gabriel Jesus and Oleksandr Zinchenko came into the side.

Julian Nagelsmann’s side were winless in the phase – having accrued only three points – and began via Leonardo Bittencourt stealing a loose Otamendi pass. City cleared the danger and Raheem Sterling soon burst past Nico Schulz and but straight into Benjamin Hübner. The referee saw nothing amiss and Sterling eventually got back to his feet. Foden then played a precise pass to Jesus but a clumsy touch let the striker down.

Andrej Kramaric showed the No 9 what slick forward play can look like when twisting Otamendi inside out before unloading a shot that bent and seemed to be beating Ederson until the goalkeeper’s flying fingertips pushed the ball for a corner.

Kramaric would not be denied for long though. Aymeric Laporte pulled Hübner down and the referee pointed to the penalty spot. Up stepped the Croatian, he gave Ederson little chance, and the Germans were ahead as they had been in the previous meeting.

City almost equalised instantly. Sane took a corner after Zinchenko had appeared to put the ball out for a throw. The delivery was met by Jesus but his header came back off Oliver Baumann’s left post. Baumann saved his side again when Bernardo Silva’s free-kick from the left was headed by John Stones and the goalkeeper made a fine stop low down.

City, as is their way, hogged the ball and searched for the quick passes and movement that undoes sides. Foden’s brain and feet impressed – at one point he attempted a neat one-two with Sterling that came close to unpicking Hoffenheim.

After a passage of City keep-ball that had Hoffenheim chasing blue shirts Sane won a free-kick down the left. Gündogan smashed the ball in and when Otamendi headed on, the bar this time saved the visitors. Next Foden failed to direct a header, Sterling drove in behind but Bauman collected his cross-shot, and, as the half wound down, Jesus was left stricken following a Kasim Nuhu challenge.

Yet at the break City were level: Sane curved a peach of a 20-yard free-kick over the wall and past Baumann, and Andreas Ekberg blew for the interval straight after the restart.

For the second half Kyle Walker replaced Stones and Hoffenheim brought on Nelson for Joshua Brenet. Within seconds Guardiola was berating his team, as if whatever he told them to do during the break had been forgotten.

Walker’s entrance added extra pace to a City side for which Sane was already causing problems. Sterling almost got in but yet again the end product was missing. When Laporte hit a regulation pass aimed at Zinchenko to a maroon shirt Guardiola shook his head once more. Better came from Sterling’s muscular run that eventually led to Jesus slipping in and shooting and winning a corner but Otamendi was unable to finish from Sane’s delivery.

City were becoming too elaborate. When they broke from their own penalty area after a Hoffenheim corner Sterling had only Baumann in front of him. Yet he passed to Sane who then moved the ball on to Silva before the ball was somehow cleared for a corner. Sterling, or Sane, really should have buried the chance.

Profligacy was contagious: Nelson spurned a gilded chance to put Hoffenheim ahead and Nagelsmann was incandescent. Soon, though, City were ahead when Sane exchanged passes with Sterling and slotted home for his second.

City’s task from here was to repel Hoffenheim. Ederson saved Schulz’s 30-yard drive but with the savvy Delph on for Zinchenko the visitors found it even more difficult to breach England’s champions. Foden saw a spectacular volley saved by Baumann but he, like the team, ended feeling only satisfaction. – Guardian