Ferguson preaches to the converted at Convention Centre

Former Manchester United boss entertains the attendance of 3,000 as part of his book-launch tour 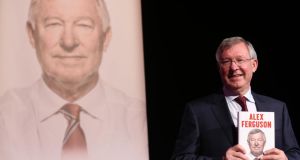 This must be how the Pope spends his Sundays. A big stage, a soft chair, an adoring crowd rapt for every word. Questions asked but nothing questioned, one true faith and nothing else entertained. Mind you, at least Francis of Rome gets to do it without Eamonn Holmes for company. No small mercy, that.

Alex Ferguson packed out the Convention Centre in Dublin last night for the latest of his book tour back-and-forths. Three thousand through the door at 40 quid a pop, an hour and 20 minutes of chat about a life that in some way altered the lives of all 3000. A night for old stories, told so many times at this stage, yet still savoured by the audience.

In that way, it was like a Stones concert. Every person was ahead of every anecdote and when they weren’t silently listening along they were murmuring the punchline before him. And they loved every minute.

Better analyst
For anyone who came with appetite whetted on the back of the various bits and pieces of score-settling in the book, he had no more morsels to throw. This was Ferguson in uncontroversial mode. The closest he veered to having a go at anyone was when he said Gary Neville was a better analyst than a co-commentator.

He even kept his gun holstered when it came to Roy Keane. Yes, their relationship had gone sour but getting rid of him after he had criticised his team-mates was still a wrench. “That was the toughest decision in all my time at United,” he said.

“When Roy started managing Sunderland, there was nobody who was a bigger help to him than Alex Ferguson. I gave him three players on loan straight away – Jonny Evans, Danny Simpson and Phil Bardsley. Really, I did my best to help him get a start. But the tough decision I had to make had to be made. And I can’t say it was wrong.”

As for Keane’s impending work situation, he was benign. Encouraging even.

“I think it’s terrific for Roy. People say he had not good experiences as a manager but he was young . . . He went from us to Celtic and straight into management. It’s hard, that. So now he has the experience of Martin O’Neill to lean on and learn by. And if he does come back into club football, he’s got that advantage . . So I think it’s a terrific appointment.”

Present tense
Of the team he has left behind, Ferguson occasionally spoke as if he was still their manager. A few times he drifted into the present tense. “I never say anything to the players after I’ve given the team-talk. If you keep reminding them of all the things you expect of them, they start thinking that you’re doubting them.” Nobody pointed out that the team-talk is someone else’s job these days.

United’s slow start to the season was airily dismissed, as was the story that Robin Van Persie’s rumoured unhappiness at the club is, in part, down to the fact that Ferguson told him he’d be staying on for three more years. “He asked me that. He asked me would I be retiring. And I told him that there was absolutely no chance that I’d be leaving. But of course that changed when (his wife) Cathy’s sister died.”

Again nobody pointed out he was confirming the story but it wasn’t that kind of night. This was for believers only. And in The Church of SurAlex, everybody goes home with a signed good book.