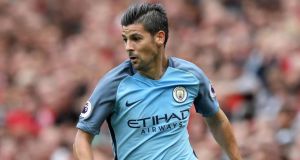 Nolito joined City from Celta Vigo last summer for £13.8million but has struggled for first-team football under Pep Guardiola and recently admitted he wanted to leave the club in a bid to boost his hopes of winning a place in Spain’s World Cup squad.

Sevilla have emerged as a possible destination for the former Barcelona and Benfica forward, and Castro says they are hoping to strike a deal.

The Sevilla president is also keen to bring Navas back to the Ramon Sanchez Pizjuan, with the 31-year-old having been released by City at the end of last season.

“We continue working on players like Navas and Nolito with the hope that both players will join us. We are exchanging information to try and reach an agreement,” he said on his club’s website.

Castro was speaking at Tuesday’s presentation of new Sevilla coach Eduardo Berizzo, who has replaced fellow Argentinian Jorge Sampaoli at the Andalusian outfit.

The 47-year-old Berizzo moves south after three years in charge of Celta Vigo, where he coached Nolito for a couple of seasons.

Berizzo admits he is a big fan of the 30-year-old but says any possible move is out of his hands.

He told a press conference: “I like Nolito a lot because I know him. As to whether we sign him or not, it’s something that is in the air. The circumstances of if he arrives here or not is the work of my colleague.”

Regarding his ambitions for Sevilla, Berizzo says his challenge is to try and make the team — who finished fourth last season in Sampaoli’s sole campaign in charge — even better.

He said: “It’s one thing to win and another to continue winning, which is more complex.

“Achieving that is more difficult and my challenge is to make this happen. That’s what we’ll work for, to make an even better Sevilla.

“My idea of football is to attack, to have possession of the ball, of recovering it quickly when we lose it. I like to attack, to go for the win, to be in charge.”