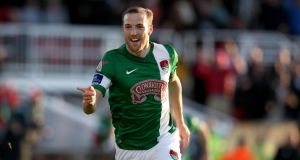 Karl Sheppard scored one of Cork City’s four goals in their 4-1 away win at Longford Town in the FAI Cup. Photograph: Ryan Byrne/Inpho

Kevin O’Connor, Seán Maguire, Karl Sheppard and Chiedozie Ogbene scored the goals as Cork City cruised into the quarter-finals of the FAI Cup with a 4-1 win over Longford Town at City Calling Stadium.

Cork were dominant from the start, taking the lead within four minutes. Longford captain Conor Powell gave away a free kick for a clumsy foul on Maguire just outside the area. Left back O’Connor ran on to skipper Greg Bolger’s free kick to drill his shot forcefully through the wall to the net.

Two goals inside as many minutes midway through the second half ended the game as a contest.

Maguire pounced on a ricochet to run clear and shoot home Cork’s second goal on 68 minutes. Gavin Holohan then put Sheppard in to score with a rising shot for Cork’s third.

Conor Ellis latched onto a poor goal kick to shoot Cobh in front on seven minutes.

Man-of-the-match O’Connor got his second on 23 minutes with a crisp volley from just outside the area.

Rangers hit back with a fine goal from Patrick O’Brien on 41 minutes.

UCD also started brightly, with Ryan Swan shooting them in front after five minutes, as they beat Limerick non-league side Janesboro 3-1 at the UCD Bowl.

Though Marty Waters doubled UCD’s lead on 26 minutes, Janesboro got themselves back into the game with a goal from Michael Ryan seven minutes before half-time.

Liam Scales clinched UCD’s win on 78 minutes, getting the final touch to Daire O’Connor’s cross to beat John Mulready in the Janesboro goal.

1 St Michael’s conveyor belt showing no signs of slowing down
2 Leinster qualify as top seeds with Benetton win
3 Gerry Thornley’s guide to the Champions Cup pool permutations
4 Munster mood will be determined before kick-off
5 Welcome to Iten in Kenya – home of champions and cheats
Real news has value SUBSCRIBE
Crossword Get access to over 6,000 interactive crosswords