Even if Ireland finish second, they may not get a play-off spot 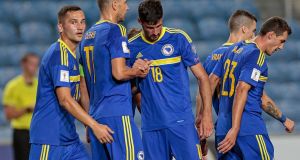 As things stand, Bosnia Herzegovina will not qualify for a playoff, despite being in second place in their group. Photograph: PA

Ireland have a tall task ahead of them to finish in the top two places in their World Cup qualifying group, with Tuesday night’s opponent’s Serbia two points ahead of them, and final opponents Wales two points behind them.

However, even if Martin O’Neill’s team can hold on to second place after their three remaining Group D games, they still might not qualify for a World Cup playoff.

Of the nine European qualifying groups, the second placed team with the lowest points tally will miss out on a playoff. Ireland are currently only two points ahead of bottom-ranked second place side, Bosnia in Group H.

Ireland, who still have Moldova and then Wales to play in the final game of their group, will of course qualify automatically if they can top the group.

Results against each group’s bottom side are not included in the calculations for worst runners-up - in Ireland's group, Moldova are currently in last place.

Bosnia have already played their bottom placed team - Gibraltar - twice, and their remaining fixtures to be considered are at home to Belgium and away to Estonia. They won their corresponding fixture against Estonia 5-0, before losing 4-0 in Belgium.

Off the back of Ireland’s performance in Saturday’s 1-1 draw with Georgia, they will need to improve considerably and quickly to keep their hopes of reaching a first World Cup since 2002 alive. Their encounter against Serbia kicks off at 7.45pm on Tuesday night in the Aviva Stadium.