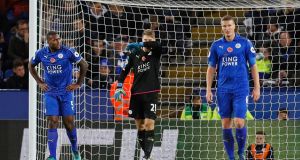 The loss of their long unbeaten home record in the Premier League all but confirmed that Leicester will have to look to the Champions League for a sensation this season. West Bromwich Albion deservedly became the first visiting team in more than a year to leave the King Power with three Premier League points and, in doing so, they left Leicester just two above the bottom three. It is premature to talk about the champions being embroiled in a fight against relegation but we can certainly say that the chances of them retaining their domestic crown are so remote as to be extra-terrestrial.

Last season Leicester conquered thanks to their efficiency, as they were a unit in which every component gelled and excelled to create synergy. But they have spluttered for much of this campaign because of the loss of N’Golo Kanté and, in the league at least, of whatever mental fuel it was that helped drive them to the title.

In the last fortnight they had shown signs of rediscovering their fluency but here they relapsed into disjointedness. Albion functioned better from the start and won thanks to a neat clip by Matt Phillips in the 72nd minute after an uncharacteristic mistake from Danny Drinkwater.

“I’m sorry for the loss of our home record,” said Claudio Ranieri. “We were so bad in the first half, we were better in the second but we still lost,” he continued before venturing, without conviction, that his team may have been jaded from their midweek draw in Copenhagen. “Maybe we had Champions League fatigue, I don’t know.”

Leicester’s scruffiness surfaced as early in the second minute, when Andy King was caught dawdling midway inside his own half by Salomón Rondón, who burst into the box and curled a low shot towards the bottom corner. Ron-Robert Zieler dived to tip it around the post. It was a terrific save but the goalkeeper’s all-round performance in place of the injured Kasper Schmeichel betrayed his unfamiliarity with his team-mates, the German’s hesitant distribution one of the hosts’ many problems. Twice he came close to being caught in possession by Rondón, the game’s outstanding forward.

Rondón met a cross by Phillips in the 15th minute. His header missed the target but the fact that he was dominating Wes Morgan and Robert Huth in the air, as well as on the ground, was ominous for Leicester. The hosts, meanwhile, rarely troubled the Albion defence. Ranieri had opted to leave Jamie Vardy on the bench. The England striker’s scoring touch has deserted him, as he came into this game without a goal in his last 11 matches for his club, and the manager explained that the plan here was for Leicester’s wingers to play to the strengths of Islam Slimani and Shinji Okazaki instead by providing crosses from wide. But Riyad Mahrez failed to make an impact in the first period and Ahmed Musa’s deliveries were bad enough to suggest that if he were your milkman, you would find broken bottles on your door step every morning.

Phillips’ crosses were better. In the 17th minute he forced Christian Fuchs into an urgent intervention to prevent Chris Brunt from scoring from close range. Ranieri replaced Okazaki with Vardy at half-time and Leicester improved, although those two facts were not necessarily related, as Vardy seldom threatened. And before improving, Leicester fell behind. Rondón was instrumental in the breakthrough, winning the ball in midfield before feeding Phillips, whose cross from the right was guided into the net by a header from James Morrison.

That triggered a reaction from Leicester. They drew level three minutes later via a long-distance Algerian one-two. Slimani swept the ball wide to Mahrez and then galumphed into the box to get on the end of his compatriot’s cross and equalise with a splendid header.

Now we had a high-calibre contest and the game hurtled from one end to the other. Danny Simpson had to bundle a header off his own line in the 70th minute. But eventually Leicester were undone by another outbreak of sloppiness as Drinkwater unintentionally played a backpass into the path of Phillips, who cantered on to it and lifted the ball over the advancing Zieler. It was a deflating moment for a midfielder who contributed so much to Leicester’s title triumph and perhaps a critical one for Phillips.

“His biggest problem is self-belief,” said Tony Pulis. “I had a good chat with him last week. He’s got all the tools and he has to understand that he’s a good player.” If doubts ever stalk him again, the Scottish international need only look back to this performance.