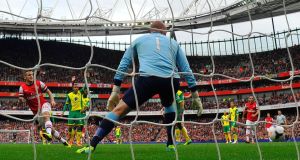 Arsenal manager Arsene Wenger feels his side’s belief will grow with every victory - but maintains they must strive to improve in order to last the distance in the Barclays Premier League title race.

The Gunners moved two points clear at the top of the table after beating Norwich 4-1 at the Emirates Stadium, where Jack Wilshere swept in a contender for goal of the season following a superb passing exchange.

It was a sixth league win from eight and an 11th in all competitions, from a start which has some Arsenal fans talking up a long-overdue sustained assault on the championship.

Wenger, though, stressed there can be no let up in focus if that form is to be maintained through fixtures which include clashes with both Liverpool and Manchester United.

“We have belief. The belief is strengthened by every win,” said Wenger. “We have come out of a long period where most of the time in recent years in October we were already looking forwards (up the table) from being behind. At the moment we are in a better position, but there is a long way to go.

“We just have to focus on developing as a team and keep the solidarity we have.”

Arsenal had swept into the lead on 18 minutes with a goal of the highest quality.

There seemed little real danger when Santi Cazorla, back in the side following an ankle injury, moved down the left, before cutting the ball back to Wilshere.

It was swiftly returned to the Spaniard, who laid it off to Olivier Giroud. The France forward then exchanged a brilliant improvised one-two of flicks with Wilshere, who ran on through the yellow shirts on the edge of the penalty area to dispatch the ball past John Ruddy.

Wenger admitted it took him a few replays to really appreciate the intricacy of the move.

“You only realise when you see it again on the big screen how unbelievable it is,” said Wenger. “It was done with such a speed, that it was impossible to defend, you would say it was played at the speed where you could play with your hands, but not your feet. I am convinced you will see that goal (replayed) a lot.”

Aaron Ramsey had been rested to the bench, but was called into action just before half-time after Mathieu Flamini suffered double vision following a clash of heads with Alex Tettey. The midfielder is now a doubt for Tuesday night’s Champions League game against Borussia Dortmund as a result.

Wenger has welcomed his selection poser, with the Wales midfielder scoring his ninth goal of an impressive season to settle any late nerves after Jonny Howson had made it 2-1 on 70 minutes.

“People say always you have to buy, when you have the players people say you have a problem,” the Arsenal boss added. “I believe we have a good togetherness and everybody accepts that everybody needs to play in the right periods it is down to me just to make the right decision.”

Despite the final scoreline, Wenger conceded it had not all been an easy ride for his team.

Poland goalkeeper Wojciech Szczesny pushed away a goal-bound 20-yard strike from Norwich midfielder Leroy Fer just before half-time, and the visitors did not lay down even after Mesut Ozil made it 2-0 with a glancing header following a quick counter attack.

Norwich boss Chris Hughton tried to take solace from his team’s positive efforts, but knows the pressure will be on against Cardiff next weekend to get back to winning ways and move up the table following successive defeats, with Chelsea having won at Carrow Road before the international break.

“Any time you are on the back of a couple of defeats, it is never a nice feeling and nor is being in the bottom three,” said Hughton. “However, we were in a similar position this time last season, but we have more points than we did then. If we are looking for positives, there are plenty, but of course we have to win football matches.”