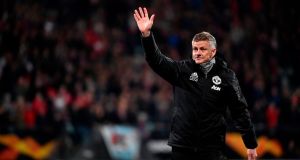 The good news for Manchester United supporters is that Ole Gunnar Solskjær has admitted that things have moved on since his glory days as a player. The United manager has frequently been accused of living in the past, but when it was suggested after the tame showing against AZ Alkmaar that his side have completely lost the fear factor of old, Solskjær was powerless to disagree.

“We are not in the 1990s now – it’s a different era, a different group that we are building,” Soskjaer said. “We know there are going to be ups and downs but I’m ready to see these boys blossom. There’s not many clubs of our stature that play the young players that we do. We give them a chance to come through and I’m sure some of them will go on to be part of a successful team.”

While Solskjær is entitled to dream of a glittering future his growing number of critics are becoming increasingly dissatisfied with the present. United were unable to muster an attempt on target in The Hague, and though Marcus Rashford was denied a late penalty the home side had two reasonable appeals turned down. “I think United should be happy with a point,” AZ’s veteran defender Ron Vlaar said. “I wouldn’t say they deserved any more than that.”

The story now moves on to Newcastle, where Solskjær will be attempting to claim his first away win since the famous victory in Paris six months ago that persuaded the club to let him have the job on a permanent basis. Newcastle know even better than their opponents that it is not the 1990s any longer. For a short while in that decade they were title rivals of Sir Alex Ferguson’s side, but they have been in the Championship since then, disillusionment with owner Mike Ashley set in long ago and last week they were walloped 5-0 at Leicester.

This is a tricky fixture for Solskjær, for while on the one hand it appears to present an opportunity to pick up three points, should Manchester United fail it would be legitimate to wonder which Premier League opponents might be beatable away from home. Solkjaer has promised some fresh players, and doubtless intends to use more senior players in the starting lineup than he did against Alkmaar, though Anthony Martial remains injured and in all probability Paul Pogba’s rest will be extended.

“Paul will probably not be ready,” Solskjær said. “There’s an international break coming up and it might be better to give him the 10 or 14 days extra to be ready for Liverpool. I do feel an away win is going to come. If it doesn’t we’ll be getting the same questions after every game. I don’t think we’ve been playing too badly; sometimes the execution in front of goal has not quite been there, but that’s something we’ll work on.

“I haven’t walked off at the end of many games thinking there was a big gap between us and our opponents. I’ve felt that maybe a couple of times but not very often. I’m going to set up a team to try and win at Newcastle and I’m sure Brucey [Steve Bruce] is going to do the same. The surface against Alkmaar was a hard one to play on but we have a couple of days for recovery and should be ready for Sunday, no excuses whatsoever.” – Guardian