War of words between Jose Mourinho and Arsene Wenger rolls on 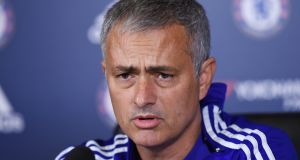 Jose Mourinho during his press conference at Cobham on Friday. Photograph: Tony O’Brien/Action Images via Reuters/Livepic

Jose Mourinho’s deep-lying antipathy towards Arsene Wenger has surfaced yet again in the wake of the Frenchman’s post-match comments at Stamford Bridge last weekend, with the Chelsea manager suggesting his opposite number is subject to preferential treatment from the English Football Association.

The Portuguese was in a particularly spiky mood at his media briefing at Cobham on Friday before Saturday’s trip to Newcastle United. Mourinho claimed he could not answer questions on the three-match ban for violent conduct that has been imposed retrospectively on the striker Diego Costa in the wake of Saturday’s 2-0 win over Arsenal, for fear of incurring a touchline suspension. Indeed, he was reluctant to address the implications of that sanction.

“I have no comment, and I’ll tell you why,” he said when asked if he was concerned Costa may attract more attention from referees after the punishment imposed this week.

Asked to clarify, he added: “You know that some can [talk about referees]. It’s an imaginary list, but clearly [I am not on it].”

Wenger had been highly critical of Mike Dean’s performance at Stamford Bridge in his immediate post-match press conference, and urged the official and the FA to scrutinise video footage of Costa’s conduct in the 43rd minute clash with Laurent Koscielny. The striker was subsequently charged over that incident.

The conversation then moved on to Steve McClaren, a manager under pressure at Newcastle whom Chelsea confront on Saturday.

Asked to be specific about which manager was outside the list, he said: “You know. The one who can speak about the referees before the game, after the game, can push people in the technical area [a reference to the pair’s clash in the technical area at Stamford Bridge in October 2014], can moan, can cry in the morning in the afternoon, and nothing happens. He can not achieve [success] and keep his job, still be the king. I say just one.”

The tit-for-tit maintained a theme of animosity between the two, with Wenger having suggested earlier in the day in his own media briefing that Claudio Ranieri, whose Leicester team Arsenal play on Saturday, was responsible for laying many of the foundations for the success that Chelsea have enjoyed over the last decade. The implication was very much that Mourinho had inherited a side ready to dominate.

“When Claudio left Chelsea he had built the team that was so successful at the start,” said Wenger. “I remember them finishing second in the league with Ranieri and the team was upcoming with young players like John Terry and Frank Lampard, who were the players that contributed to the success of Chelsea.”

Chelsea have yet to see the FA’s full written reasoning for the violent conduct charge imposed upon Costa, with Mourinho clearly frustrated that he was without the Spain forward at Walsall in midweek and on Tyneside on Saturday despite having yet to receive the precise details over why the charge was upheld.

He reiterated his surprise that Gabriel, who had been sent off by Dean for flicking out his boot at Costa, had since seen the card rescinded despite Wenger having admitted his player’s conduct had warranted a dismissal.

“One of the things that was clear in football was that, when a player reacts to something that happened before – like [Nemanja] Matic reacting last season after a criminal tackle – that retaliation was always punished in football,” added Mourinho. “Now we know it isn’t always. You can do that. You can do that.”