Tottenham stalled as Sunderland dig in for stalemate 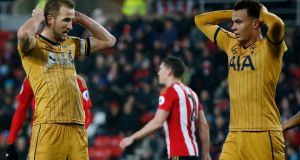 As a masterclass in how to stop Tottenham Hotspur, Sunderland’s performance proved near faultless but, textbook as David Moyes’s spoiling tactics undoubtedly were, the upshot was mutual frustration.

If Mauricio Pochettino could not betray his disappointment at a draw which leaves his Tottenham Hotspur side representing a receding title threat in Chelsea’s rear view mirror, the Wearsiders really need wins if they are to stand a realistic chance of staying in the Premier League.

At least Sunderland’s enthusiasm for getting in their guests’ faces before delighting in forcing them into repeated dead attacking ends offers a semblance of hope at the end of an evening when Spurs looked in need of some winter sun but had just cause to complain that Jack Rodwell should have been sent off in the first half.

While Spurs were without the unwell Hugo Lloris in goal, Moyes welcomed Lamine Koné and Didier Ndong back from Gabon and Africa Cup of Nations duty. Koné quickly proved his worth, the central defender making a fine block to prevent Son Heung-min connecting with Harry Kane’s dangerous early cross.

Sunderland’s manager is not really a fan of back threes – to put it mildly – but, lacking a specialist left-back in the wake of Patrick van Aanholt’s defection to Crystal Palace, Moyes opted for a 3-5-2 formation, featuring Billy Jones and Javier Manquillo as wing-backs.

Well, that was the theory: in reality Pochettino’s team had arrived with such an attacking mindset that their hosts rapidly retreated into back five mode as Michel Vorm, Lloris’s deputy, struggled to keep warm on a damp, raw Wearside night.

Vorm did have one, extremely routine, save to make from a Fabio Borini shot – its tameness perhaps highlighting precisely why Moyes was so disappointed to have failed in his attempt to buy a new attacking partner for his lively yet isolated Spurs old boy, Jermain Defoe.

With Jordan Pickford still nursing a knee injury, Sunderland also had their second choice goalkeeper in action but Vito Mannone proved faultless in pushing Victor Wanyama’s 20 yard shot round a post. While Wanyama had been imposing his authority on central midfield, his team-mates were struggling to find a way to deconstruct the home side’s packed, and extremely bloody minded, defence.

When Mousa Dembélé appeared to have finally broken clear, he was sent crashing to earth courtesy of a late, high and thoroughly reckless tackle on Rodwell’s part. Lee Mason, the referee, promptly showed the midfielder a yellow card but there was a fairly compelling argument that it should have been red.

While Wanyama exacted swift retribution with a rather strong tackle on Rodwell – (starting his 37th League game in two-and-a-half years here and hoping to finish on the winning side for the first time) – an accidental collision between Jones and Danny Rose resulted in the latter hobbling off to be replaced by Ben Davies.

Rodwell’s assault on Dembélé seemed to have galvanised the crowd and as, suddenly, Sunderland poured forward, Davies’s first act was to slice a clearance into the path of Jones whose cross for Defoe might have prefaced a goal had Toby Alderweireld not intervened with an important block.

If Moyes’s spoiling tactics were clearly working, a set-piece probably represented Sunderland’s best hope of a goal but the only problem was their dead-ball execution proved consistently awful.

At the outset of the second half, Borini did escape on the counterattack, only to end up ballooning his eventual shot over Vorm’s bar. All industry and minimal incision or real invention, that little cameo appeared emblematic of Sunderland’s performance.

Spurs though were pretty low on their customary improvisation, so low indeed, that shivering in the technical area, Pochettino cut an increasingly frustrated figure as he watched Dele Alli, Christian Eriksen and company persistently run into attacking cul-de-sacs.

When Ndong hacked Alli down the visitors won a free-kick in classic Eriksen territory and his subtly curving delivery did not disappoint. Fortunately for Moyes, Mannone proved equal to it, saving well to prevent the ball squeezing inside a post before, subsequently, diving low to keep a subsequent Son effort out after Jason Denayer’s block had initially denied Kane.

By now slumped back into his padded dugout seat, Pochettino muttered his displeasure as a header from the unmarked Wanyama arced over the bar following Son’s menacing cross in the wake of a partially cleared corner. Incredibly, it was Tottenham’s best chance of the night but Wanyama seemed to lose balance as he rose to meet that centre.

The pressure was building on Sunderland and it took impeccable timing from Mannone to intercept a Kane cross just as Son looked set to pounce. Shortly afterwards the latter made way for Moussa Sissoko, who smiled broadly before offering the home crowd an ironic clap in homage to their enthusiastic booing at the former Newcastle United midfielder’s entrance. It speaks volumes that this minor sub-plot proved quite a highlight.