Sudden impacts from Rashford and Fellaini keep United at 100% 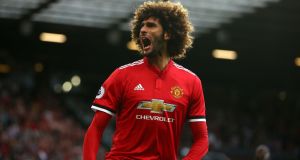 Jose Mourinho’s men made it three wins from three at the start of the new Premier League campaign as second-half replacements Rashford and Fellaini made goal-scoring contributions shortly after coming on in a 2-0 success.

United had cruised to 4-0 wins over both West Ham and Swansea in their opening two contests, but the champions of two seasons ago were more obdurate opponents and their goalkeeper Kasper Schmeichel saved a Lukaku penalty eight minutes after the interval.

However, with Mourinho having praised “the amazing professionals who are not playing at the moment” in his programme notes, it was two of those who did not start that were the heroes on this occasion.

United’s rapid start to the new top-flight campaign would have impressed one of their most famous fans, Usain Bolt, who was in attendance at Old Trafford.

The recently retired Jamaican sprint king, a three-time Olympic champion across both 100 and 200 metres, might have reached the Riyad Mahrez long free-kick that Jamie Vardy nearly collected between Phil Jones and David De Gea in the 12th minute.

United’s Achilles heel last year was their inability to beat teams at home, where they drew on 10 occasions in the league, and there were early signs that this could be another of those evenings.

They thought they had gone ahead in the 28th minute when a Harry Maguire error led to Lukaku firing at Schmeichel, with Juan Mata putting away the rebound only to be denied by assistant Constantine Hatzidakis’s flag.

Replays showed it was a marginal offside call that may just have been correct.

Paul Pogba steered wide from an Anthony Martial back-post cross shortly after and Schmeichel’s flying save to deny Mata in front of the Stretford End evoked memories of his father’s frequent acrobatics on the same ground.

A series of Pogba shots from range followed, the furthest from 35 yards out almost squeezing inside a post, but United entered the half-time interval having failed to break down stubborn visitors once more.

Mourinho may have been considering switching Martial for Rashford at that point, but it was from the Frenchman’s cross that United won a 53rd-minute penalty as the ball crashed into Danny Simpson’s arm from close range.

Despite Leicester’s protests, referee Michael Oliver pointed to the spot and Lukaku stepped up hoping to continue his fine goal-scoring start since joining from Everton, yet Schmeichel guessed correctly, springing to his right, and parrying the attempt behind.

That galvanised Leicester and their typical counter-attack threat returned, with the tricky Mahrez twice beating United defenders on the right before firing efforts across goal, one which De Gea kept out with his foot and the other that was drilled past everyone.

Mourinho then turned to Rashford in the 67th minute and three minutes later he produced the opener.

The Foxes failed to designate anyone to keep an eye on the forward at a Henrikh Mkhitaryan corner and he swung his leg from the centre of the area, with the ball bouncing up and into the net via Schmeichel’s push.

Lukaku blazed over when presented with another opportunity to become the first United player to score in his opening three Premier League games, though his fellow Belgian Fellaini wrapped things up with eight minutes to go.

Fellow substitute Jesse Lingard cut in from the right and looked to be going for goal with an attempt that Fellaini, who looked just offside, diverted past Schmeichel with his knee.

United then had De Gea to thank for a brilliant instinctive save with his foot from Andy King in stoppage time to ensure they head into the international break with three wins, three clean sheets and 10 goals scored.