Roberto Soldado shows no sympathy as he scores from the spot 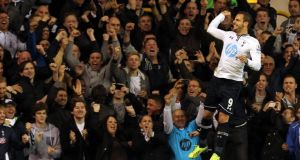 Steve Bruce walked into the post-match conference, his normally genial features set in stone, and at first he merely urged his audience to “write it, because I can’t say it, otherwise I get fined and all that nonsense”. But Bruce was never going to stay silent and who could blame him?

The Hull City manager had watched his injury-hit team keep Tottenham Hotspur at arm’s length, with increasing comfort as the second half wore on and the most precious and, possibly, unexpected point beckoned. Then Jan Vertonghen crossed, the ball hit Ahmed Elmohamady’s leg, it reared up to strike his hand and the referee, Michael Oliver, awarded the penalty.

Elmohamady was no more than five yards from Vertonghen; the cross was travelling at pace and the Hull player even appeared to be looking away from the ball. In other words there was no intention. And Oliver awarded the penalty. Even Andre Villa-Boas, the Tottenham manager who, controversially, dug out his club’s supporters for creating a negative atmosphere, admitted that the decision was harsh.

No sympathy
Roberto Soldado showed no sympathy. For the third time this season he scored from the spot to give Tottenham a 1-0 Premier League win. Half of his tally for the club have been penalties and the previous conversions, against Crystal Palace and Swansea City, also followed contentious awards.

Tottenham were not given a single penalty last season; how their fortunes have turned. They looked to have run out of ideas before Oliver’s decision, leaving Bruce to pour out the frustration.There is only room for the highlights, so here goes. It was a “joke, an absolute joke,” Bruce said and Oliver “couldn’t wait to give it, absolutely couldn’t wait to give it”. He had “robbed the players of a well-earned point”; he “totally balls-ed it up” and it was “totally unjust.”

Bruce went on. “If my player made a decision like that, he wouldn’t be playing next week or, if I keep making decisions like that, I get the sack.” He called for “common sense” and added: “Who knows, we could get relegated by a point.” The referees, he noted, were professionals, who “get paid handsomely”.

“And I have to ask the question,” Bruce said. “Would we have got it?” Somebody muttered that Hull might not have done. “There you go.”
Guardian Service