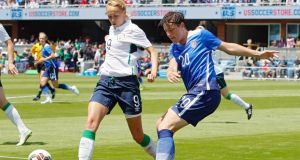 Stephanie Roche in action for Ireland against the US in a friendly in San Jose in May, a match the home side won 3-0. Photograph: Brian Bahr/Getty Images

Upstairs in the clubhouse named after Bob Paisley, Sunderland Ladies football team are tucking into post-match chicken and steamed veg. There is a collective satisfied tiredness, out here in the small Co Durham former pit village of Hetton-le-Hole. After all, Sunderland have just beaten FA Cup finalists Notts County to go third in England’s Women’s Super League. And there among them is Stephanie Roche.

It’s 20 months since her famous goal for Peamount United propelled Roche to international recognition and she has since had brief spells in France, with Albi, and in America with the appropriately named Houston Dash.

But in June, as she turned 26, Roche moved to Wearside and penned a deal that – “all going well”, she says – could see her stay at Sunderland until 2017. Stability is an aim.

Sunderland’s women’s team, amalgamated into the original club, were promoted last season and Sunderland have invested again. Five of England’s World Cup squad – including captain Steph Houghton – began at Sunderland but no longer play there. The club wants to keep future stars and Roche’s arrival is all part of the evolution.

Hetton-le-Hole, where Bob Paisley was born, is where Sunderland’s reserves (men) play. This pitch is where Martin O’Neill first saw James McClean and immediately promoted him.

For Roche, this is the end of one hectic period in her life – which has seen Roche rub shoulders with Lionel Messi and Cristiano Ronaldo and finish runner-up to James Rodriguez in Fifa’s Puskas award. And the beginning of another – France, America and red carpets have come and gone, now she just wants to “settle”. That is Roche’s key word.

“I just think it’s more about football here as opposed to anything else,” she says of the new life. “I’m enjoying it, the girls are all about just doing the best they can.

Roche was speaking on Sunday after her Sunderland debut. She was given the number 10 jersey and was stationed on the left of midfield. It’s not her ideal position and having not played for two months, it showed at times.

“I felt a bit tired in the opening 20-30 minutes,” Roche says. “It took me a while to get going but it’s my first match since May. It’s going to take me a while. I thought the longer the game went on, the more I settled.

“It was good to get a start, to get some game-time. It was a tough game, we defended for most of it, so I didn’t really get a chance to go forward. But we got a win at the end, great finish by Beth [Mead], and in the last minute. Always nice.”

Notts County had four England starters in their team and, as Roche says, that experience and know-how helped them dominate possession. After 64 minutes Roche was replaced by Abbey Joice, who made an impact.

“I’m here three weeks and it’s good to have my first game out of the way,” Roche adds. “The main thing for me today was to get three points and climb the table. The girls have done really well in the first half of the season to get to fourth in the table. Today we just wanted to keep the momentum going and I’m just happy to be part of the team.

“I’ll do what I can do. As I said, today was a different kind of game for me, I’m not usually a defensive player. But I had to work hard to do what needed to be done. Hopefully in the next few games I’ll be able to show what I’m about in attack.

“Usually I play through the centre. I’m left-footed so sometimes I get put on the left. But I don’t mind where I’m playing, as long as I’m playing the game. It’s all about the team, it’s not a personal thing. You saw that today, the girls’ team spirit.”

After England’s third place at the World Cup in Canada, Sunday marked the domestic re-start.

There were record crowds at Manchester City and Arsenal and at Sunderland The 955 attendance was double the average. There is much talk of sustainable growth. Going steady suits Roche too.

At the same time, Sunderland’s match programme, ‘SAFSee’, showed five games in 18 days. Next up, at Hetton on Saturday evening, are league leaders Chelsea. That will be a test of Sunderland, women’s football’s popularity, and Roche.

“I think it’s growing,” she says of the women’s game. “England doing well means that people know about it a bit more. I just hope people will pay to come and not just this week. We play Chelsea next at home. That’s a big game for us. Hopefully we can get the crowds and it doesn’t wear off.”

1 Monica Seles: The warrior queen who could have been the best ever
2 Thrillingly fluent, thrillingly pointless: Man City’s riposte comes too late
3 Welcome to Iten in Kenya – home of champions and cheats
4 Dreams of Leeds fans go down the toilet
5 Premier League team news, statistics and TV times
Real news has value SUBSCRIBE