With Kante and Kovacic ruled out through injury, midfielder may start against Palace 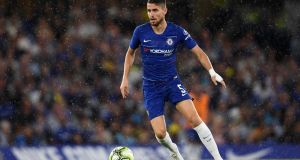 Jorginho: has struggled to make Chelsea’s starting X1 since the restart of the season following the coronavirus suspension. Photograph: Mike Hewitt/Getty Images

When N’Golo Kante went down with a hamstring injury during the closing stages of Chelsea’s win over Watford on Saturday, it was revealing that Frank Lampard turned to a teenager instead of his vice-captain. Billy Gilmour came on and Jorginho remained in the stands, wondering when he will get to take part in Project Restart.

The impression is of a player fighting to prove his worth all over again. Derided as the face of Sarriball last year, Jorginho has not featured at all since the season resumed last month. After working hard to win the Chelsea faithful over at the start of the campaign, the Italy international is back on uncertain ground.

With Kante and Mateo Kovacic injured, the stage could be set for Jorginho to shine when Chelsea visit Crystal Palace this evening. Yet public support from Lampard will mean nothing if the former Napoli midfielder stands aside for Gilmour, the gifted 19-year-old Scot.

It has been an abrupt change for Jorginho, who has had an important role for much of Lampard’s first season as Chelsea’s manager. Only Kepa Arrizabalaga, the goalkeeper, and Cesar Azpilicueta, the captain, played more minutes than the 27-year-old before the suspension of the season. Jorginho is popular in the dressing room and he worked to please Lampard, showing more urgency on the ball.

Last season, however, there was the controversy of Maurizio Sarri using Jorginho in a deep-lying role and moving Kante to the right. It was an awkward fit and Lampard wants Kante shielding the back four. Jorginho, booked 13 times this season, lacks the pace to perform defensive duties and there is a feeling that Gilmour has a sharper range of passing and movement.

Gilmour sat deep in the 4-0 win over Everton just before lockdown, giving Mason Mount and Ross Barkley the freedom to roam, and that trio could start against Palace. Although Gilmour was taken off at half-time during last month’s win over Leicester in the FA Cup, he is a threat to Jorginho’s future at Stamford Bridge.

Juventus, managed by Sarri, made sense until they signed Arthur in a swap deal that saw Miralem Pjanic move to Barcelona. Chelsea paid €55m to sign Jorginho in 2018 and, with big moves to fund, will want not to sell him on the cheap. It is a tricky balancing act for Lampard, who respects Jorginho’s ability and leadership.

“He does not have to do anything different,” Lampard said. “He trains well, he shows me that he’s good for the group, on and off the pitch, he’s vice captain of the club. It’s purely my choice with what I see from the games, how I want the make-up of my midfield to be.”

Yet change is in the air at Chelsea. Lampard wants a new left-back, with Leicester’s Ben Chilwell his top target. He is concerned about his side’s physical shortcomings when defending set-pieces and is tracking West Ham’s Declan Rice, who can play at centre-back or defensive midfield.

Chelsea, who have already sharpened their attack by buying Timo Werner from RB Leipzig and Hakim Ziyech from Ajax, are also leading the race to sign Bayer Leverkusen’s Kai Havertz. Bayern Munich have said that they cannot afford Havertz this summer and it is understood that the 21-year-old German does not want to wait a year before leaving Leverkusen. A move to London appeals to the attacking midfielder.

Lampard wants more creativity. He has complained about Chelsea’s ability to break teams down this season, criticising their slow passing. Yet the Watford game hinted at a solution. Mount moved back from the No10 role and thrived as a No8, impressing with snappy, aggressive passing.

“I do like midfield players who can perform not all the roles but can play high, can play on the side, can do the defensive duties and Mason really has that,” Lampard said. “His work off the ball is fantastic and if I feel like getting him high up the pitch to put more pressure on the other team if they want to play out, that can help us off the ball.

There was the message for Jorginho: become more flexibile, more rounded. It is not over yet but the clock is ticking. – Guardian

1 James Ryan injury could open the door for Ryan Baird
2 Ken Early: Frank Lampard’s problems start at number one
3 Niall Quinn: postponed League of Ireland fixture ‘a blow’
4 Shane Lowry finds some welcome form as US PGA looms
5 All in the Game: Klopp gets the last laugh in quiz show
Real news has value SUBSCRIBE