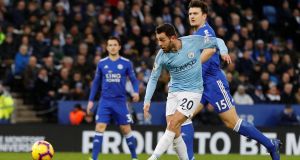 Bernardo Silva accepts that Manchester City will be under the greater pressure in Thursday night’s showdown against Liverpool at the Etihad Stadium but the midfielder has urged his team to remain true to their footballing principles.

City enter the game with their confidence pepped by Sunday’s 3-1 win at Southampton, which was timely after they suffered three defeats in the previous four Premier League matches. They sit seven points behind the leaders, Liverpool, before what is the classic six-pointer. Win and City’s title defence would be back in business; lose and it could be over.

Under Pep Guardiola, City have a poor record against Jürgen Klopp’s Liverpool, winning only one of seven meetings – the 5-0 Premier League home victory in September 2017, which was coloured by the Liverpool forward Sadio Mané’s 37th-minute red card. They lost 4-3 in the Anfield return last season and they were beaten home and away in the Champions League quarter-final.

City’s approach on Thursday will be fascinating. In the league fixture at Anfield earlier in the season, which finished 0-0 after Riyad Mahrez missed a late penalty, they were more conservative than normal, slowing the tempo and exerting control in possession. Guardiola had been extremely wary of Liverpool’s quick transitions.

It was a more typical City performance at Southampton, one in which they pressed hard and risked the ball, particularly at the back when playing out through the goalkeeper, Ederson.

Ralph Hasenhüttl, the Southampton manager, noted how City took “a lot of risk to build up their game” and he felt that if his players could “find the right moment to attack and win the ball early”, they could score, which is what they did when Pierre-Emile Højbjerg equalised. City know that against Liverpool, it will be essential to find the right balance.

“We know the pressure is a little bit more on us because if we don’t win it will be very difficult to go after them,” Silva said. “That’s what we will try to do; it’s what we try to do in every game. We’ll try to play the same way that we’ve been doing always – keep pressing high and having control of the ball.

“It was good to come back against Southampton after the difficult moment of losing three out of four games in the Premier League. The team had a very solid performance and everyone’s happy. I think it was really good to get a win before the game against Liverpool and get our confidence back to where it should be.”

Liverpool’s attacking trio of Mané, Roberto Firmino and Mohamed Salah invariably draws the attention but the first thing that Silva mentioned when asked about City’s title rivals was their defence. Liverpool have conceded only eight goals in 20 league games and no opponent has scored more than once against them.

“They’ve had a lot of clean sheets,” Silva said. “It’s an impressive defence. Everyone knows how good their front three are – they work a lot and so do the midfielders. It’s a very good team. We beat them at home last season but we lost there in the Premier League and there was the Champions League, too. In the first leg they were better than us but in the second we were better than them but because of a lot of things we don’t control we lost that game.”

Silva acknowledged it was preferable to lead from the front in a title race, rather than attempt to play catch-up. “It’s better to be that team than what we are right now,” he said. “We have to think that we have to win every game possible. If we win on Thursday, the gap will only be four points – seven or four is very different – but we’ll put some pressure into them. They’re unbeaten until now in the league. We’ll try to end that.” – Guardian