Coronavirus: China pushes back against allegations from US 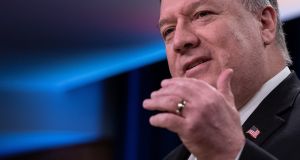 Chinese state media has criticised US secretary of state Michael Pompeo, calling him “evil” and a liar, as Beijing sought to push back against recent allegations from the US without prompting a confrontation with president Donald Trump.

Chinese state media published a series of commentaries lashing out at Mr Pompeo after he said there was “enormous evidence” that the coronavirus outbreak sprung from a high-security virology lab in the central Chinese city of Wuhan. The official Xinhua News Agency said the top US diplomat was speaking “nonsense,” while a newscaster from China Central Television read a commentary accusing him of “spitting poison.”

“US secretary of state Pompeo picked up his own lies in a May 3 interview with s the media,” newscaster Li Zimeng said. “If the cheating behaviours from evil politicians like Pompeo continue, the US’s ‘Make America Great Again’ could become merely a joke.”

While the coverage included some of China’s harshest critiques of a Trump administration official since the height of the trade war last year, state media continued to steer clear of direct attacks on Mr Trump.

The same strategy allowed Chinese president Xi Jinping to satisfy nationalistic outrage at home throughout the trade war, without prompting the US president to counterpunch.

Chinese officials have instead focused their response on their biggest critics within the Trump administration, including Mr Pompeo and White House trade adviser Peter Navarro.

The US president personally seeks to blame China for the pandemic. In recent days, Mr Trump has accused Beijing of deliberately mishandling an outbreak that has killed more than 4,600 Chinese citizens to damage him politically and promised a “conclusive” report on the virus’s origins.

Although the Wuhan Institute of Virology was studying bat-borne coronaviruses like the one that causes Covid-19 at the time of the first known outbreak nearby, there has so far been no evidence showing it possessed the previously unknown strain.

Yuan Zhiming, director of the facility’s high-security Wuhan National Biosafety Laboratory, said last month that “there is absolutely no way that the virus originated from our institute”.

The closest China has come to criticising Trump directly in recent days was a foreign ministry statement Thursday attacking “certain US politicians.” Such officials “have attempted to shift their own responsibility for their poor handling of the epidemic to others,” foreign ministry spokesman Geng Shuang told reporters.

Tensions may only rise as new coronavirus outbreaks disrupt life across America and Republicans seek to deflect blame in a difficult election year. The crisis has undercut the chances that the “phase one” trade deal reached by both sides in January could help build a broader truce between the world’s two largest economies.

China has occasionally provoked Mr Trump without criticising him by name, such as when a foreign ministry spokesman circulated unsubstantiated allegations last month that US army athletes introduced the virus to Wuhan.

Mr Trump blamed that move for his decision to start referring to the pathogen as the “Chinese virus,” a term he has refrained from using in recent weeks.-Bloomberg

1 Ireland among countries urged to consider reinstating restrictions
2 Sinn Féin apologises as member resigns over social media abuse
3 ‘We feel we are in limbo’: Wedding plans in chaos due to Covid-19
4 Global Covid-19 cases pass 20m as WHO points to ‘green shoots of hope’
5 Trump evacuated from briefing after shooting near White House
Real news has value SUBSCRIBE