Sheffield Wednesday book their place in FA Cup fifth round 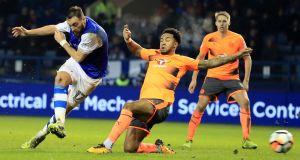 Atdhe Nuhiu scored twice as Sheffield Wednesday beat Reading 3-1 to advance to the fifth round of the FA Cup.

George Boyd was also on target for the hosts with substitute Sam Smith scoring a late consolation for Reading.

The Wednesday line-up included Dutch midfielder Joey Pelupessy, who was making his debut after signing from Heracles Almelo.

Reading had a great chance to take the lead after only four minutes when Leandro Bacuna put David Edwards through on goal, but Cameron Dawson was off his line smartly to make the save.

Jon Dadi Bodvarsson’s cross then picked out Kermorgant in the centre but he failed to make proper contact with the ball.

Wednesday took a 29th-minute lead with their first attack of note.

A great ball from Frederico Venancio found Nuhiu, who fired past Anssi Jaakkola with a low shot from the right-hand side of the area.

Jaakkola made a save from Morgan Fox a few minutes later.

The visitors had a chance early in the second half when Garath McCleary’s cross found Kermorgant whose shot was saved by Dawson.

There was an even better opening for Reading moments later when Dawson spread himself well to keep out Bodvarsson’s close-range effort.

Wednesday extended their lead when Marco Matias did well to send over a low cross from the left wing and Nuhiu (53) produced a close-range finish.

Bacuna went close to pulling a goal back when his shot from distance beat Dawson but came back off the keeper’s left-hand post.

Boyd made it 3-0 in the 61st minute, slotting past Jaakkola following indecision in the Reading defence.

Nuhiu, who was aiming to complete a hat-trick, fired wide after meeting a Jack Hunt cross and then failed with an attempted chip.

Kermorgant put an acrobatic effort wide after connecting with a cross from substitute Modou Barrow.

Bacuna then put a free-kick on target, but Dawson was equal to it, making a comfortable save.

Reading boss Jaap Stam made a double substitution in the 79th minute, sending on Smith and George Evans in place of Kermorgant and Bacuna.

Liam Moore had a header saved and Bodvarrson shot wide for the visitors.

At the other end, Jaakkola made a near post save from Matias.

Reading pulled a goal back when a deflected cross hit a post and Smith (85) pounced to stab the ball in from close range.