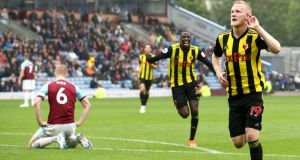 Things are looking up for Watford, who proved their opening-day win against Brighton last week was no fluke with a surprisingly comfortable defeat of the side who got closest to the top six last season.

Burnley are not used to losing at home and Watford are not used to winning away, but Javi Gracia’s first victory on the road since taking over at Vicarage Road means his side now have a maximum points return after two games while Sean Dyche must be wondering what happened to the defensive solidity that took the Clarets into Europe.

Gracia has not even seen an away goal since becoming Watford manager but he only had to wait three minutes for his side to nose in front here, Andre Gray scoring against his old club after pushing the ball out to Troy Deeney on the right and moving up to meet the return with a sweetly struck right-foot volley.

What the visitors needed to do then was sit on their lead for a little while and make Burnley work to get back into the game, though perhaps through unfamiliarity with such situations they caved in at the first time of asking from a home cornet four minutes later. Johann Berg Gudmundsson swung over a cross, Ben Foster tried to come out and claim but found his route to the ball blocked by Abdoulaye Doucouré, and it was a simple matter for James Tarkowski to head in from close range. So simple in fact it was a surprise to discover it was the big defender’s first goal for the club. Tarkowski usually goes up for set pieces but is rarely allowed a free header in the six-yard box.

After that eventful opening the game settled into something more routine once the scores were level. Burnley had slightly the better of the rest of the first half, Gudmundsson bringing a save from Foster from a free-kick and Jeff Hendrick being foiled in the act of shooting by Craig Cathcart, though Deeney brought an agile save from Joe Hart with a speculative effort five minutes from the break.

By the time the interval arrived Watford could consider themselves a little fortunate to still be level. Burnley produced their best move of the half just as it came to a close, and Hendrick might have scored with a more determined finish rather than the instinctive flick that allowed Foster to save. Still the danger was not cleared and José Holebas had to move quickly to stop Aaron Lennon pouncing on the loose ball in front of an unguarded goal, and when Ashley Westwood tried to bring matters to a close from the edge of the area his firm drive flew wide.

Watford must have ben glad of that reprieve, because they started the second half in exactly the same way they had begun the first. Doucouré slid a cleverly disguised pass to Deeney after Ben Mee had got in the way of a shot, and presented with the ball and only Hart to beat there was no way the striker was going to miss from three yards out.

This time Watford did not let Burnley back in the game but increased their lead after another three minutes, though the home side had only themselves to blame through gifting their opponents the opportunity through momentarily switching off in defence. From a Burnley throw near halfway Matthew Lowton contrived to send a sloppy infield pass straight to Will Hughes, and before Mee and Tarkowski had reacted to the danger the midfielder had caught Hart, too, by surprise with a clean strike from the edge of the area.

Hart was hardly at fault, twice in the second half he had been left exposed by the defenders in front of him, though that did not stop the travelling fans in the Cricket Ground end mocking him with chants of “England’s number four”.

Commendably, Hart retained enough concentration to prevent Ken Sema making it four in the closing seconds. The fact that Watford would not have been flattered by that scoreline is a measure of how far Burnley have slipped from the pace they set last season.