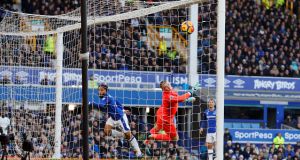 Everton’s Ashley Williams heads against his own bar as goalkeeper Jordan Pickford during the Premier League game against Chelsea at Goodison Park. Photograph: Phil Noble/Reuters

Sam Allardyce’s unbeaten run as Everton manager continued as Chelsea were held to a goalless draw at Goodison Park.

A sixth game without defeat – four wins and two draws since it was revealed Allardyce would be the new boss – shows the resilience he has instilled in a previously struggling side.

It was gritty, far from pretty but ultimately effective and it was celebrated like a victory at the final whistle as Chelsea, who had scored 10 times in their previous three visits, were frustrated in their attempts to close the gap on second-placed Manchester United.

A fourth clean sheet in six Premier League matches shows where Everton’s improvement has been made and has helped lift them from relegation candidates into ninth place.

Goalkeeper Jordan Pickford and returning captain Phil Jagielka were the cornerstones of the success as Everton joined Arsenal, Manchester City and West Ham in preventing Antonio Conte’s side scoring in the league this season.

Both sides were without their top scorers: flu laid low Wayne Rooney (10 league goals) while suspension kept out Alvaro Morata (nine) and the visitors were certainly affected more.

Allardyce was always going to keep it tight against top-four opposition so, with the emphasis on not conceding, Rooney’s absence could be more easily accommodated as he switched to a 4-1-4-1 formation with Dominic Calvert-Lewin the isolated man up front.

Eden Hazard was given the job of filling in as Chelsea centre forward but his talents were largely negated by Jagielka and Michael Keane, brought in for Allardyce’s preferred centre back pairing of Ashley Williams and Mason Holgate, who were only fit enough for the bench after flu.

Jagielka showed no lack of sharpness on his first start for almost a month by clearing off the line from Tiemoue Bakayoko and Willian in quick succession in the 10th minute.

Chelsea enjoyed the majority of possession and much of it well inside Everton’s half, but Allardyce’s plan to be compact and frustrate paid off as the closest Chelsea went to scoring was when Pickford tipped over Pedro’s shot and Andreas Christensen headed wide from the corner.

Visiting captain Cesar Azpilicueta was almost embarrassed by Calvert-Lewin when he was dispossessed on the touchline but, when the youngster cut inside, his shot was blocked.

Allardyce made a tactical switch at half-time by bringing on Williams into a back three in place of midfielder Tom Davies and replacing winger Aaron Lennon with striker Sandro Ramirez.

Williams’s first job was to hack clear a rebound after Pickford again denied Pedro but, when Idrissa Gueye went off with a hamstring injury, Allardyce was forced to make his final substitution with the introduction of Beni Baningime.

The arrival of Cesc Fabregas for Pedro just past the hour gave Chelsea renewed vigour and Hazard forced Pickford into another save but Everton’s system change had made them more resolute.

Michy Batshuayi was given 20 minutes to break the deadlock, but Williams went closest when his attempted headed clearance from Victor Moses’s cross came back off his own crossbar.

Pickford continued to keep out Chelsea with his quick reactions from a Hazard shot which deflected off N’Golo Kante the pick, and Keane could have snatched it in added time but planted his free header over the bar.