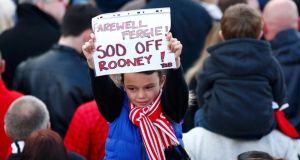 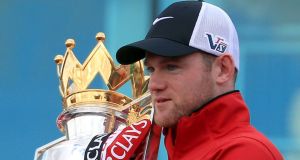 Wayne Rooney of Manchester United has handed in a transfer request, according to Alex Ferguson. Photograph: Christopher Furlong/Getty Images

Alex Ferguson is content to leave the problem of what to do about Wayne Rooney to new manager David Moyes.

Rooney has asked to leave Manchester United this summer even though he still has two years on his contract remaining. Ferguson revealed last week the request had been turned down, and, along with Gary Neville, advised the England forward to get away during the summer, get his head sorted out and return refreshed.

The matter is not quite so simple, as United will not want to allow the 27-year-old to drift beyond the summer without some kind of clear vision of his future. However, as Ferguson acknowledged, it is not his problem any more.

“I’m no longer interested in that,” said the Scot. “Quite rightly, David is going to deal with it. I am happy with that.”

United look set, however, to confirm the future of defender Rio Ferdinand early next week. It is understood negotiations over a new deal are at an advanced stage and provided there are no unforeseen hitches, an official announcement will be made.

Before then United travel to West Brom for Ferguson’s 1500th and final game in charge of United, bringing an end to a quite amazing career in which he has won a staggering 13 Premier League titles.

Now it falls to Moyes to carry on that winning tradition, with Ferguson certain the club’s expanding commercial operation will not get in the way.

Ferguson will act as Moyes’s guide in that regard and there are plenty of others at the club with vast experience who can help smooth the new man’s transition. Some aspects of life in the mighty Old Trafford machine Moyes can only experience for himself.

Touring the Far East this summer will be an interesting experience for a start.

“David will soon realise the enormity of this club,” said Ferguson. “Although I think he does already, he has to fit into the global brand and number of sponsors we’ve got. I don’t think that is an issue. He’s got a good squad of players and he’ll want to add to that himself.

“I’ve spoken to David a few times. He will have his own ideas and I would imagine he will want to come in quite soon and speak to staff.”

Jonny Evans and Phil Jones will also be partnered together in central defence, proving to the last he is keeping one eye on the future.