Roma in talks with Manchester City to sign Edin Dzeko 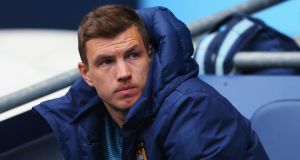 Roma are in discussions with Manchester City to buy Edin Dzeko for €20m, with the striker offered a five-year contract worth €4.5m a season.

Despite agreeing a fresh four-year deal last August the Bosnian again struggled to establish himself as first choice under Manuel Pellegrini last season. This has proved the pattern of his City career since joining from Wolfsburg in 2011 when Roberto Mancini was in charge.

The forward was unable to score consistently, enjoying only patches of his best form until the second part of the 2013-14 campaign when he scored 11 of his 16 league goals from late January onwards as the club won a second championship in three years.

On signing new terms last summer, Dzeko said: “I’m really happy here at City, it’s a second home to me, so it was an easy decision to stay for the long term. I knew from the beginning when I started here that I wanted to stay for a long time – I can’t see any place better than here.”

However he managed only four league goals despite starting 22 games last season. Roma hope to finalise the deal before July 25th, the day of their first pre-season friendly, against Persija Jakarta, in Indonesia.

Roma are trying to overhaul their forward line and are looking to offload Mattia Destro and Seydou Doumbia, with the former possibly joining Monaco and Watford interested in taking the latter on loan.

The Roma sporting director, Walter Sabatini, has made Dzeko, 29, his No1 target up front but if the club cannot reach a deal with City they are likely to try to sign Anderlecht’s Aleksandar Mitrovic but would face competition for the Serb, with Porto also interested.