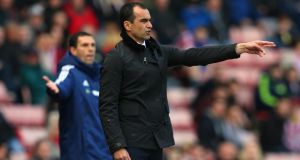 Everton manager Roberto Martinez issues instructions to his players during the Premier League match between Sunderland and Everton at the Stadium of Light. Photo: Alex Livesey/Getty

The only concern anyone at Goodison Park harbours about Roberto Martinez is the very real prospect that he will soon be headhunted by a bigger concern. A club like Barcelona, for instance.

While Everton’s manager led his team above Arsenal and into fourth place courtesy of a seventh straight Premier League win, Sunderland were left stuck to the bottom of the table, lacking both a League win since February 1st and answers to questions about Gus Poyet’s future.


Team’s predicament
No one really blames Paolo Di Canio’s successor for the team’s predicament. Indeed, many Wearsiders feel that, as an ideologically motivated coach sharing some broad philosophical similarities with Martinez, Poyet might ultimately offer Sunderland a bright future.

The suspicion, though, is that he will walk out this summer. When that notion was aired at the end of a match which Everton won “ugly” thanks to Wes Brown’s own goal after Gerard Deulofeu’s cross-shot, Poyet opted to swerve the issue.

“I think there’s something wrong in the football club and it’s not an excuse. I need to find it. If I don’t find it, we’ve got a problem.

“Who will be next? A, B, C – call him anything and the club will be in the same situation. I don’t like it. I need to find the solution. It’s sad because the one who loses his job and looks bad is the manager.

“I’m going to leave a better club. There’s a better understanding of what our football is about, better respect for the fans, respect in training and the way we behave. But it’s not enough. I think this team needs an electric shock.”


Old guard
Perhaps the inevitable fracturing of the so-called old guard in Sunderland’s dressing room this summer will help repair one of the games biggest managerial black holes.

A major overhaul beckons but it remains unclear whether Poyet intends to supervise it.

“I don’t want to rebuild,” he said. “I didn’t come to Sunderland to rebuild nothing, I want to be part of something that gets better all the time.”

How he would love to be in Martinez’s shoes.

His former Real Zaragoza team-mate probably sympathises, but Martinez could do worse than remind Poyet that it was only after several seasons of long, hard slog at Swansea and Wigan that he earned the right to manage Everton.