‘We’re a very good group, but we need more players to strengthen the squad’ 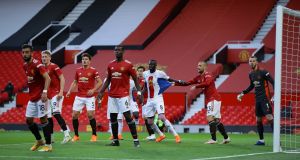 Luke Shaw has called for Manchester United to sign more players to “keep up” with their big-spending rivals after making an unconvincing start to the season in the 3-1 home defeat to Crystal Palace on Saturday.

United suffered a second successive home defeat to Roy Hodgson’s side in their opening match, with Donny van de Beek - the club’s only only major summer signing for £35m - scoring after coming off the bench. United have revived their interest signing Porto’s Alex Telles, with the Brazilian set to provide competition for Shaw at left-back if he signs.

But with Liverpool, Manchester City and Chelsea having all strengthened significantly in the window, the England defender admitted Ole Gunnar Solskjaer’s squad is in need of reinforcements to be able to challenge the two sides that finished above them last term.

“We are a very good group, but personally I think we need more players to strengthen the squad,” he told Norway’s TV2. “It can give us a boost. When you look around at how other teams are strengthening their teams, then we must also do it to keep up with the others.”

Telles - a Brazil international - has been on the radar during the window and after a deal for Real Madrid’s Sergio Reguilon could not be agreed - he has since joined Tottenham - Solskjaer is again considering him. Telles has a buyout clause of around €40m though United would hope to pay less.

Shaw was part of a slipshod United defence that conceded two Wilfried Zaha goals plus Andros Townsend’s opener, with Van de Beek’s strike only a consolation.

Shaw said: “Possibly everything went wrong. From my point of view the pre-season that we’ve had altogether is not the correct way it should have been - we’ve had a week [ONLY]all together. We haven’t been able to prepare in the way that we wanted and that’s not an excuse because we have the quality of players to be able to win games like this.

“But we weren’t up to it tonight and we’ve been punished. It’s the start of a new season, we should have been fresh. We knew how Palace were going to play, sit in the block and try and stay on that, possibly all of their goals came from that. We paid the price today at times we were sluggish and weren’t at it.”

Shaw reiterated the point about a truncated pre-season caused by United finished 2019-20 on 16 August, when they lost their Europa League semi-final to Sevilla. “My first day back training I could have probably counted on one hand the number of people who were training,” he said. “Look at teams who have been together a while, training, playing games, I think Palace have played quite a few more games than us and it showed. We lacked that fitness and confidence.

Shaw admitted there was a dressing room inquest into the display but focus is now on Tuesday’s trip to Luton Town in the Carabao Cup. “A lot of things were said after the game and we need to put it to bed,” Shaw said. “We need to be very disappointed because we should be but forget about it and move. We’ve got a big game on Tuesday, we need to win that and pick up momentum.” - Guardian