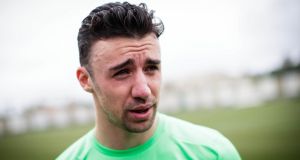 Enda Stevens: Credits Chris Wilder and Paul Cook as the two managers who helped him get where he is today. Photograph: Ryan Byrne/Inpho

Having left Dublin for Aston Villa six years ago Enda Stevens has taken something of a scenic route to his first Ireland squad. The 27-year-old readily admits, however, that he almost lost his way completely.

The former St Patrick’s Athletic and Shamrock Rovers defender played just seven games for the then Premier League club before dropping down the leagues in the hope of more regular football. Two managers, he says, were key to helping him halt the slide. Chris Wilder took the time to explain to him in the frankest of terms just why he wasn’t extending a loan spell at Northampton before Paul Cook demanded more from him, then helped him deliver it during a successful spell with Portsmouth.

“It [Villa] had been a massive step up and it wasn’t that I wasn’t ready, I just didn’t appreciate it,” he says. “I didn’t work as hard as I could to become an Aston Villa player. It got to my head a bit, you think you have made it and that but you are nowhere near making it.

“At the end of the day, I wasn’t good enough but I had to come away, down the leagues, to find that out.

“It was never in my mind to come home,” he continues, “but it did cross my mind that I might have to. The phone wasn’t ringing. So when I got the chance to go to Portsmouth I jumped at it. It was my last chance saloon, definitely; if it didn’t work out there, I don’t know where I would have been.

“He makes you work as hard as you can and it’s the fittest I have been. When I went to Portsmouth, he got me as fit as I could be and my football benefited from it.”

Portsmouth won promotion from League Two last season and Stevens played a big enough part in the success to make the division’s team of the year. It was at that point Wilder, now in charge of Championship side Sheffield United, decided to renew their acquaintance.

“I had been at Northampton for a month under him but I didn’t play well,” he recalls. “I had done alright in spells, but I wasn’t fit. I was in a tough position and when he decided not to renew my loan, I had been rejected by a League Two club. [That was a blow but] he sat me down for an hour and I went back thinking I needed to get my act together.

“I was happy to work with him again, he’s similar to what I worked with Paul Cook; he is big into team bonding, a tight knit dressing room where everyone wants to work for each other.”

The manager is doing something right because with eight games remaining United are just two points off the playoff places and Stevens, now a wing back, is probably playing the best football of his career.

He arrives after just scoring his first goal for the club and believes they can still play their way into the promotion spots but, just for the moment, that is a slightly secondary consideration.

“I knew I had to get to this level [Championship] to have a chance of being called up. Being honest I wasn’t really expecting it so soon. Now that I’m here, though, I am just trying to buy in to what these lads are doing and what they are all about. Hopefully I can do that and fit in then once we get this week over I can start focusing on the playoffs.”