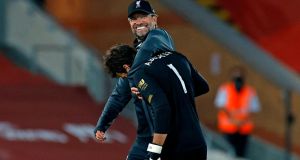 The how, where and when of Liverpool’s coronation as Premier League champions has been under the microscope since football shut down in March. It will not arrive as anyone at Anfield imagined or wanted but, should this prove the victory that secures the 19th title, an emphatic dismantling of a Crystal Palace team managed by Roy Hodgson will be entirely appropriate.

Ten years ago it was Hodgson in the dug-out that Jürgen Klopp now commands. Five years ago it was Palace that left Liverpool’s new manager feeling alone after Scott Dann’s late winner sent home fans heading for the exits. How far they have come.

Liverpool now stand on the cusp of their first league title for 30 years after a victory that captured the best of this season’s undisputed champions. Outstanding goals from Trent Alexander-Arnold, Mohamed Salah, Fabinho and Sadio Mané put Klopp’s team within two points of their promised land. It will be only 24 hours away should Manchester City drop points at Chelsea. So close now.

Liverpool’s 56th league game without defeat at Anfield – Palace being the last victor in April 2017 – confirmed they are on another level to most opponents in the Premier League.

Klopp was able to select arguably his strongest starting XI for the visit of Hodgson’s team and the importance of Salah and Andy Robertson was evident immediately. Both players helped stretch Liverpool’s play and the Palace defence along with it. Mané and Roberto Firmino were more like their old selves in the pockets of space that opened up.

Liverpool created clearer opportunities in the first 10 minutes than in the entirety of Sunday’s Merseyside derby. Georginio Wijnaldum was presented with the first following a miscued clearance by Andros Townsend when attempting to hook away a Jordan Henderson cross. Mamadou Sakho prevented Salah capitalising with a header but the ball broke kindly for Wijnaldum who dragged his shot well wide.

Palace desperately needed an outlet but their best option, Wilfried Zaha, sustained an injury in an innocuous incident after only 15 minutes. Pace and penetration departed with him from the visiting attack.

The breakthrough that Liverpool craved arrived shortly afterwards. Jordan Ayew was penalised for a needless nudge on Virgil van Dijk when Palace had otherwise dealt comfortably with a Liverpool corner. Ayew complained long and loud to referee Martin Atkinson but it was a foolish move in a dangerous position and invited Alexander-Arnold to fine-tune the free-kick routine that provided Liverpool’s greatest threat at Everton.

He fine-tuned it to perfection, whipping the set-piece over the Palace wall from 25 yards and just inside Wayne Hennessey’s right-hand post as the goalkeeper scrambled across his line in vain. The meaning of the goal was not lost in the celebrations of the boyhood Liverpool fan who grew up near Melwood, crowd or no crowd.

Liverpool were inches away from doubling their lead within minutes when Hennessey could only push a Robertson free-kick into the path of Henderson unmarked on the edge of the penalty area. The captain connected cleanly this time but his half-volley struck the base of a post and Joel Ward cleared from Van Dijk’s scrambled follow-up.

At the subsequent corner Van Dijk was clearly held by Gary Cahill but neither Atkinson nor VAR intervened. It was the same again, much to Liverpool’s dismay, when Firmino’s attempted flick over Cahill struck the defender’s raised arm inside the penalty area.

Undeterred, Liverpool continued to control proceedings in an increasingly assured display. Salah was presented with a chance to lob Hennessey from distance when the goalkeeper headed Alexander-Arnold’s long ball into his path. A difficult return was sliced wide, but there was no reprieve for the Wales international when Salah next had the Palace goal in his sights.

The Egypt international’s 17th league goal of the season was the product of superb play in central midfield by Fabinho. Shrugging aside the close attentions of Ayew, the Brazilian strode forward and lofted an inch-perfect chip over Patrick van Aanholt’s blond hair into the run of Salah. Liverpool’s leading goalscorer took the ball on his chest before beating Hennessey with a convincing left-foot finish.

Fabinho’s next contribution was even better. The second half brought no respite for Palace and the central midfielder punished them in stunning style when he collected Robertson’s pass and, with time and space to pick his spot, drilled an unstoppable finish beyond Hennessey from 30 yards.

The polish arrived with an exquisite team goal that was constructed from the back and saw Salah release Mané with an exquisite first-time pass. Mané swept his finish inside the far corner and a guttural roar came from below. It was Klopp. Almost there. – Guardian