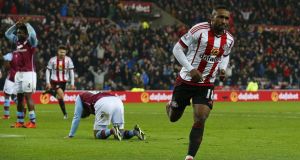 Sunderland’s Jermain Defoe celebrates after putting his side 2-1 up against Aston Villa in their Premier League clash. Photo: Lindsey Parnaby/Getty Images 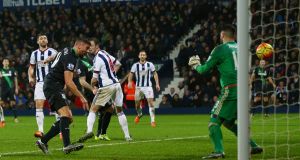 Jermain Defoe blasted Sunderland to a first victory in six attempts, giving them hope of avoiding relegation from the Premier League and nudging Aston Villa deeper into the mire.

The 33-year-old, drafted in to save the Black Cats in January last year, struck with 18 minutes remaining and then again in injury time to set up a 3-1 win which moves Sam Allardyce’s men seven points clear of basement boys Villa — although they are still in major trouble.

Sunderland gradually grew into a game which they started poorly and took a 30th-minute lead through Patrick van Aanholt’s deflected shot, and although Carles Gil levelled after the break with a sumptuous volley, Defoe ensured the points remained on Wearside to the delight and relief of the locals among a crowd of 41,535.

The defender poked in his first Baggies goal just as it looked like Jonathan Walters’ equaliser had rescued a point for the visitors.

Stephane Sessegnon’s first goal in over a year had given Albion a second-half lead and Tony Pulis has now won three straight games against his former club.

Geoff Cameron was also sent off with seven minutes left for reacting to a challenge from Claudio Yacob.

Leicester lost ground at the top of the Premier League as they began the new year with a goalless draw against 10-man Bournemouth at the King Power Stadium, with Riyad Mahrez missing from the penalty spot.

Claudio Ranieri’s side ended 2015 level on points with leaders Arsenal, despite finishing the year with a defeat at Liverpool and another home stalemate against Manchester City.

They dropped more points on Saturday despite playing for more than half an hour against 10 men following Simon Francis’ red card. That incident led to Leicester winning a penalty but Mahrez saw his spot-kick saved by Artur Boruc.

Ranieri said this week he felt the Bournemouth game would be tougher than City’s visit, and he was not far wrong. The Foxes huffed and puffed and Jamie Vardy failed to find the back of the net for a fourth successive match as Leicester fell two points adrift of Arsenal at the Premier League summit.

Victor Wanyama’s second-half red card for two bookings tipped an even game in the Canaries’ favour.

Two minutes after Wanyama’s dismissal, Norwich took the lead as Tettey drilled his shot into the top corner after fine work from substitute Vadis Odjidja-Ofoe.

The win was Norwich’s third in four Premier League games and eased their relegation worries.